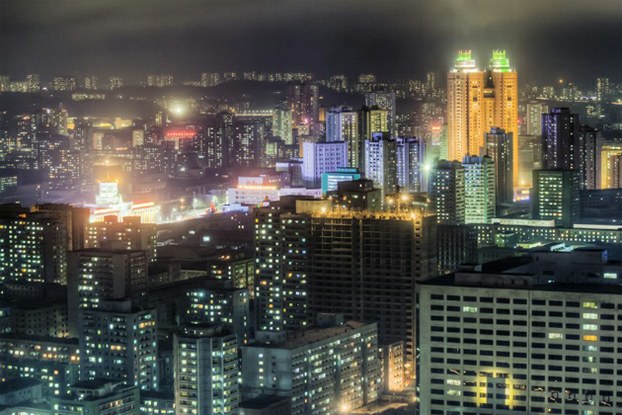 Buildings in North Korea's capital Pyongyang are shown at night in a file photo.

Authorities in North Korea have uncovered a string of Pyongyang officials involved in drug crimes after the arrest of a man in his 40s who allegedly had been selling large amounts of methamphetamine in the North Korean capital for years sparked a three-month investigation, RFA learned this week.

The activities of the suspect were not limited only to North Korea; he also allegedly traded meth internationally. Because the investigation has implicated many senior officials it has been reported directly to Kim Jong Un himself, sources say.

“A 45-year-old man has been under intense preliminary screening for three months at the Pyongyang Central Prosecutor’s Office,” an official from South Pyongan province, who asked not to be named, told RFA’s Korean Service Tuesday.

“During the investigation it was revealed that the man, who was arrested in mid-December last year in Pyongyang’s Songyo district, was in charge of drug production and distribution in the capital,” the official said.

The source said that the suspect was able to amass a large amount of money and had even expanded his operation overseas.

“He started in the drug trade in 2011 and earned a large sum of dollars by selling not only in Pyongyang but also in other countries like China and Japan.”

While the manufacture and sale of drugs is technically illegal in North Korea, people involved in the drug trade are often able to use their personal or professional connections to avoid reprisal.

“He was able to elude detection because he was in collusion with high-ranking officials from the police department and the Central Committee [of the Korean Workers’ Party],” said the source.

The involvement of the officials became a huge scandal, according to the source.

“This case was so scandalous that it was reported directly to Kim Jong Un. The Central Committee ordered more investigations into the involved officials, so now everyone in the network of high-ranking officials is scared,” said the source.

A second source, from Pyongyang, revealed the suspect’s background information to RFA on the same day, including that the suspect’s surname is Kim.

“Kim was originally from Songyo district in Pyongyang, but he was imprisoned in a correctional camp in 2009 for theft of state property. After leaving the correctional camp he was deprived of his Pyongyang citizenship and deported to Paegam county in Ryanggang province,” the second source said.

Having the right to live within the city limits of the North Korean capital is a privilege that only few North Koreans can dream of. Once there, citizens can be expelled for even the slightest infractions. According to the second source, Kim was not suited to rural life, so he illegally re-entered Pyongyang, and turned to the drug trade to support himself.

“He lived as an illegal resident and dealt meth made in Hamhung in Pyongyang,” the second source said, adding, “He was able to cultivate strong relationships with high-ranking officials from powerful government agencies by bribing them with the dollars he earned from the drug trade or free drugs.”

Kim’s downfall came in December last year, when authorities began a crackdown on illegal residents in the capital.

“The leader of the local inminban reported that Kim was living a luxurious life despite not being employed. Police searched his house and found $100,000 in cash and meth, so he was booked for  preliminary investigation.”

The inminban is a neighborhood organization that enables the government to more efficiently control the public. Leaders of the inminban must report their neighbors’ suspicious activities to their superiors.

The second source said that the police decided to direct the case to the Central Prosecutors’ Office after they were pressured by high-ranking officials of several powerful government agencies, including the police, to cover it up.

“As the case was now a Number One Report Case [meaning that Kim Jong Un himself would be made aware of it], the Central Committee [of the Korean Workers’ Party] decided to make an example of all those involved, to sound an alarm at the powerful government agencies,” the second source said.

“About 10 high-ranking officials, including from the central party, the Central Prosecutors’ Office and the Pyongyang Police department were removed from their posts.”