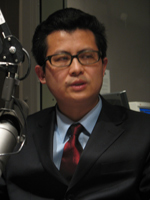 HONG KONG—Prominent Chinese civil rights lawyer Guo Feixiong has been beaten in prison and is now on the fifteenthday of a hunger strike, his wife and sister have said.

“He was beaten Dec. 18, the fifth day after he entered the prison in Meizhou. A fellow prisoner beat him while more than 200 other prisoners looked on,” Guo’s wife, Zhang Qing, told RFA’s Mandarin service after visiting with Guo for 40 minutes on Dec. 28. She was accompanied by his older sister, Yang Maoping.

“He told me he was beaten for a long time. The prisoner stopped beating him only when the onlookers began to boo and shush to express their displeasure. In the process of the beating, he fell from the stairs, about two meters,” Zhang said.

Guo Feixiong, the professional name of Yang Maodong, is serving a five-year sentence for conducting illegal business activities, after publishing a book about a political scandal and helping villagers lead a campaign to oust local officials accused of corruption.

He was arrested in September 2006 and sent to Shenyang on Jan. 20, 2007. He was transferred back to Guangzhou on March 30, tried on July 9, sentenced Nov. 14, and transferred Dec. 13 from a detention center in Guangzhou to serve his term at the remote Meizhou Prison of Guangdong Province.

Labor but no reading in prison

They drew a line in front of his cell door and told him not to cross the line and not to speak with any of the other more than 200 inmates. I infer from this that he is in solitary confinement.

“He looked much worse today than when I saw him Dec. 12—he’s been on a hunger strike since Dec. 13, for 15 days. He told me they have been force-feeding him and that his daily intake is about one-quarter of a normal person’s daily intake. He looked very thin, very pale. He said his hunger strike would last 100 days,” his wife said.

Zhang said her husband was told he would have to work eight hours a day in prison, sewing clothing, in addition to training in the evening. “He’s a man. What does he know about sewing?” she said.

“He has an irregular heartbeat. The air quality in the workroom is very bad. And it is very noisy. This constitutes a form of physical abuse. So he asked not to engage in labor. Then they drew a line in front of his cell door and told him not to cross the line and not to speak with any of the other more than 200 inmates. I infer from this that he is in solitary confinement,” she said.

Guo is also barred from reading, Zhang said. “That’s why he is on a hunger strike for 100 days—to protest all these things—the deprivation of his basic rights. They also threatened to send him to a mental hospital. In the past they carried out their threat to send him to Shenyang, where he was tortured. That’s why we take this threat very seriously. He said he is facing an extremely grave situation. He said this is just like what happened to him in Shenyang… He called for the outside world to campaign on his behalf. He said this was the first time that he ever issued such a plea.”

Guo’s sister, Yao Maoping, said her brother looked “emaciated and anemic. From the way he walked I could tell something is wrong with his spine. He walked in a strange way—his steps looked abnormal.”

They engage in manual labor, not physical labor. They work eight hours manufacturing handicrafts. But it’s impossible for someone who’s in ill health to engage in labor. He would get treatment.

“I asked a prison official surnamed Xiao why my brother was on a hunger strike. He said, ‘Your brother refused to obey prison rules.’ He said my brother refused to do this thing and refused to do that thing. I said it was because he had been disabled by them…I asked that my brother’s injuries be examined. He said he would consider my request. I told Guo Feixiong that I would pay for the examination. But he said he did not want to do it if we had to pay for it ourselves.”

“I asked him to stop the hunger strike. He said he’d do it for 100 days. My brother said, ‘I’ve never asked the world to give me anything, but I now ask for their help urgently. Because they may send me to a mental institution.’”

A duty officer at the prison said in an interview that it was “impossible” for a prisoner to be beaten by another prisoner in front of more than 200 prisoners, although he added that those who beat others are punished by having their jail terms extended. Those who report such beatings have their sentences reduced, said the duty officer, who asked not to be identified.

He also denied that anyone was forbidden from speaking to other prisoners, and that a line was drawn in front of any cell door and said it was “impossible” that a prisoner could be deprived of his right to read books and newspapers. He also said it was impossible that a disabled prisoner would be forced to engage in prison labor.

“They engage in manual labor, not physical labor. They work eight hours manufacturing handicrafts. But it’s impossible for someone who’s in ill health to engage in labor,” the official said. “He would get treatment.” Hunger-striking prisoners are hospitalized for treatment, he said, adding, “Isn’t that called medical parole?”

Police seized three computers, handwritten papers and notebooks, and a cellphone when they arrested Guo in September last year, according to his wife. Guo first drew international attention as part of the legal team helping the villagers of Taishi, Guangdong province, to prepare a recall case against their elected village chief amid allegations of corruption during a land deal.

He has also reported severe beatings at the hands of the police following the bitter and long-running dispute, during which he served as a member of Beijing-based lawyer Gao Zhisheng’s law firm. Gao lost his law license after he criticized the government for its treatment of the banned Falun Gong movement.