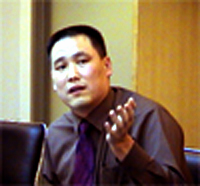 HONG KONG--A court in the eastern province of Anhui has acted illegally in a libel trial involving two authors who wrote an in-depth expose of official abuse and corruption in the Chinese countryside, lawyers for the couple have charged.

In an official letter to the Fuyang city Intermediate People's Court, a lawyer for husband-and-wife authors Chen Guidi and Wu Chuntao said the court had exceeded the time limit of six months for a decision in the August libel case brought by a local official.

We express grave concerns about the ability of this Court to maintain judicial impartiality and independence in its decision making.

"This case has already exceeded the time limit set down in article 35 of the China's Civil Procedural Law. During this time we have not received a single document from the court explaining why this is so," said the letter, which was entitled "Application For a Speedy Decision" and signed by defendant Chen and lawyer Pu Zhiqiang.

"Justice that arrives late is no justice," it said, adding that illegal extensions of court deliberations was a cancer spreading through China's judicial system. "It is difficult to contest that the practise of handing down late decisions is rife at every level of court from the Supreme Court down," it said.

Chen and Wu's award-winning book, The Situation of China's Peasants rocked China's urban middle classes and leadership elite when it appeared in 2003, with its heartrending accounts of the abuse and hardships suffered by Anhui farmers.

The book--which has sold millions of copies--sparked intense debate throughout Internet chatrooms and bulletin boards. Some analysts say it prompted Beijing to restart its former practise of issuing a rural policy white paper annually in early 2004.

The book reports official abuses of rural communities—particularly in their home province of Anhui—in unprecedented and devastating detail, and sparked a libel lawsuit by one of the officials named in it, former Linquan County Party Secretary Zhang Xide.

The U.S.$24,000 libel case was held in Zhang's home political territory of Linquan county and Fuyang city, which rights groups said undermined the fairness of proceedings. Zhang's son is a judge in Fuyang.

Pu's letter accused the court openly of being compromised by political influence.

"On Oct. 27, I learned that cultural liaison officials from the Hefei municipal government had expressed to Chen and Wu their wish that the case should be settled out of court. At the same time, another of the couple's legal representatives, Lei Yanping was called in 'for a chat' by the justice department of the Hefei municipal government, and told that they too believed an out-of-court settlement would be best," the letter said.

"In the few days that followed, a number of officials, even some from the Anhui provincial level of the Communist Party propaganda department expressed the same views to Chen and Wu," it said, adding that the couple had been threatened with 30 or more similar lawsuits if they continued with the case in court and lost.

It is difficult to contest that the practise of handing down late decisions is rife at every level of court from the Supreme Court down.

Pu said domestic Chinese media had maintained a deafening silence on the affair.

"As professional lawyers, we regard such manifold expressions of "concern" from so many quarters in the public domain as evidence that this Court has been subject to influence that is outside the law."

"We express grave concerns about the ability of this Court to maintain judicial impartiality and independence in its decision making," the letter said.

China's constitution enshrines freedom of the press and prohibits libel against individuals. But the concept of allegations made against officials in the public interest has made little headway, and is unlikely to be included in a new Media Law currently being drafted, experts say.