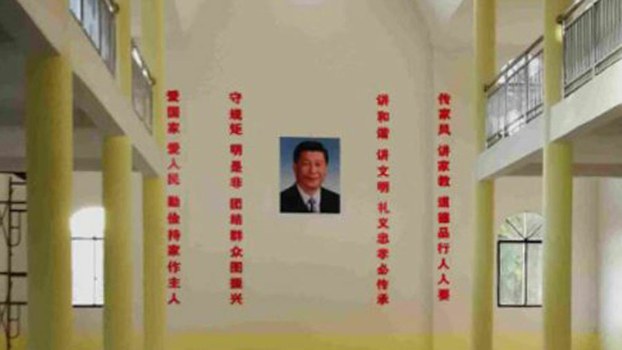 A Catholic church in Ji'an, in the eastern Chinese province of Jiangxi was forced to replace a statue of the Virgin Mary with President Xi Jinping's portrait, Nov. 25, 2019.

Authorities in the eastern province of Jiangxi have forced a Catholic church to replace a painting of the Virgin Mary with her child with one of President Xi Jinping, as well as hang up the Chinese flag and nationalist slogans in support of the ruling Chinese Communist Party.

The True Origin Catholic Church in Jiangxi's Ji'an city built the church after raising more than a million yuan in donations from believers, according to the overseas-based news website Bitter Winter.

But in September, officials from the local government's religious affairs bureau ordered the church to remove the church name from public display, and replace it with a banner proclaiming "Follow the party, thank the party, obey the party."

Officials also took down an image of the Madonna and hung President Xi's portrait in its place. Shortly afterwards, officials confiscated the keys to the building and its members were unable to use it for worship, the report said.

They also threatened to cancel the retirement pensions of older members if they carried on attending the church.

Treated as a cult

Officials have told unofficial Catholic churches that any church that refuses to join the government-backed Patriotic Catholic Association will be treated as a cult, a designation that prompts harshly repressive measures in China.

The news from Jiangxi emerges amid an ongoing crackdown on underground Catholic worship since Beijing and the Vatican signed a controversial deal in September 2018 over the appointment of bishops, in spite of warnings that religious repression targeting unofficial churches would likely intensify.

The controversial deal eliminated the division between bishops and churches recognized by the government-backed Catholic Patriotic Association and those appointed by Rome.

Rome recognized seven bishops appointed by the Chinese state, and the agreement also saw the founding of a new Catholic diocese in Chengde, in the northern province of Hebei.

Father Shen of the Diocese of Changzhi in the eastern province of Shanxi said his church had also hung up the Chinese flag.

"We have one hanging up here," Shen told RFA, but declined to comment on the reports from the True Origin Church of Heaven in Jiangxi, saying that they could be "rumors."

Li Qiang, a Protestant believer from Jiangxi's Jingdezhen city said many people are unhappy with the move, but daren't say anything for fear of reprisals from the authorities.

"A lot of people are very frightened right now, and are too scared [to talk]," Li said.

And a believer surnamed Li from a Protestant church in Yuanyang county, Henan province, said it had fared similarly at the hands of local religious affairs bureau officials.

"On Feb. 21, our church cross was torn down, the doors of our church were closed, and the national flag was flown there on the same day,"

Li said. "We received news two days ago that they are demolishing the church."

"Our church went through all the legal procedures for official recognition as a religious venue, but now they want our land, and our church workers are working hard to communicate with the government about it," he said.

The Yuanyang county bureau of ethnic and religious affairs issued a "Notice of Administrative Penalty" to Li's West Street Christian Church on Nov. 18, saying that it had been found to be in financial disorder, accusing members of deliberately destroying financial records and accounts.

The church's pastor Li Juncai was arrested earlier this year and tried for "destroying accounting receipts" and other charges. He has yet to receive a sentence.

The Chinese Communist Party, which embraces atheism, exercises tight controls over any form of religious practice among its citizens.

China is home to an estimated 68 million Protestants, of whom 23 million worship in state-affiliated churches, and some nine million Catholics, 5.7 million of whom are in state-sponsored organizations.

The administration of President Xi Jinping regards Christianity as a dangerous foreign import, with officials warning against the "infiltration of Western hostile forces" in the form of religion.

Reported by Qiao Long for RFA's Mandarin Service, and by Ng Yik-tung and Sing Man for the Cantonese Service. Translated and edited by Luisetta Mudie.

Does Chinese people in China believe in any higher being at all or are they just worshiping their human leaders? And what's wrong in China and some other countries that made their citizen wanted to move/escape to the Western countries, some risking their life to make the journey.

Foreign religions, such as Christianity and Islam need to be removed from the surface of China.

Let red Chinese bring in marxism-leninism that is not foreign.