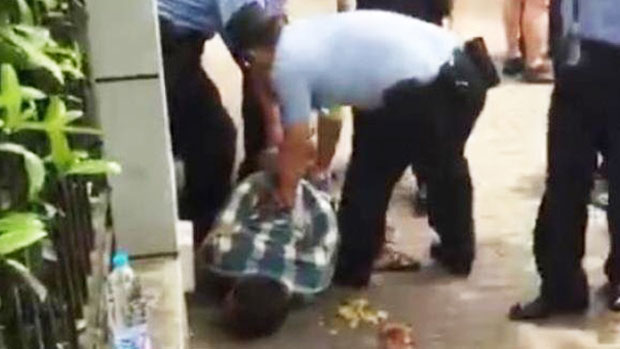 Two pupils at an elementary school in Shanghai died on Thursday in a stabbing attack by a man who said he had "lost all hope," and wanted revenge on society, state media reported.Two students at the Shanghai World Foreign Language Primary School died when the attacker stabbed them just outside the school grounds, while a third student and a parent sustained injuries in the attack and were in a stable condition, the China Daily newspaper reported.The attacker, described as a 29-year-old unemployed male surnamed Huang, started stabbing the victims at around 11.30 a.m. on the street outside the school on Pubei Road in Shanghai's Xuhui district, the paper said.It said the attack came as parents and students returned to the school to find out their final grades in end-of-year exams.Eyewitnesses shot cell phone footage of the attacks, posting them online. In one video, a parent is seen talking to one of the victims. "Hang in there, be brave," the parent says. "Don't go to sleep ... don't go to sleep."One eyewitness told RFA that the attacker had deliberately aimed at the victims' necks."The two children were stabbed in the neck and fell to the ground, and there was so much blood," the eyewitness said. "The mother of one of the boys was also stabbed while trying to fend off the attack, but she didn't die.""The attacker was then brought down and pinned to the ground by urban management police and security guards ... then the police came," the eyewitness said. "Apparently he had bought the knife brand new in a supermarket."Not a disgruntled parent

An officer who answered the phone at the Xuhui district police department declined to comment when contacted by RFA on Thursday."I don't really know, I'm not sure," the officer said. "The investigation isn't yet complete; the [perpetrator] has only just been arrested."An employee who answered the phone at the school on Thursday denied online rumors that the attacker was a disgruntled parent of a child expelled from the school."No, that is definitely not the case," the employee said.A second employee said the school buildings are now under guard."School is out now, and we have a guard at the gate," the employee said. "But you'll have to call the police and ask them, because I don't don't anything about this."An employee at a nearby business told RFA that people had begun laying flowers at the scene of the attack to mourn the dead.The attack is the latest in a string of deadly attacks on children in recent years.Growing social tensions

In 2010, China's central government ordered a nationwide security clampdown around schools after a string of deadly attacks on young children and staff in kindergartens.The order came after a man went on the rampage with kitchen cleaver at a Shaanxi kindergarten, leaving nine people dead, seven of them small children.The Chinese public was still reeling after the horrific attack, which left children as young as three years old with deep cleaver wounds to the head, when a second attack in Shandong's Zibo city killed three kindergarteners.Experts have blamed growing social tensions, a widening gap between rich and poor, and associated mental health problems for the spate of attacks.Hong Kong psychiatrist Tsang Fan Kwong said that social suppression under the ruling Chinese Communist Party, which keeps tight controls over freedom of expression and suppresses peaceful criticism, could play a role in exacerbating existing mental health problems."There is a lot of social pressure and it is likely that more people are suffering from mental illness than before," Tsang said. "People react differently to long-term suppression [of their needs anddesires].""They may also have a problem with losing control, perhaps antisocial personality disorder, meaning that they aren't able to deal with the pain of others, and all they want is to vent their own suffering," he said.Reported by Yang Fan for RFA's Mandarin Service, and by Wong Lok-to for the Cantonese Service. Translated and edited by Luisetta Mudie.