The director of a film about the life of a prominent Uyghur activist claims that Beijing's opposition has provided his work with much needed publicity.
2009-07-24
Tweet 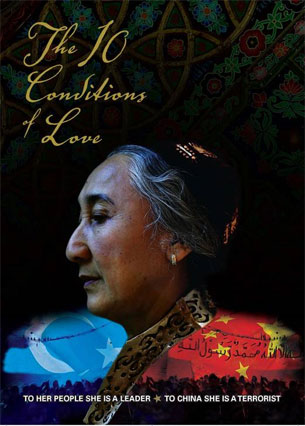 HONG KONG—The Chinese government's opposition to the screening of a documentary film about exiled Uyghur leader Rebiya Kadeer has given its first-time director much-needed publicity.

Jeff Daniels, a Melbourne-based independent filmmaker, said his documentary "The 10 Conditions of Love" about Kadeer's life and the Turkic-speaking mostly Muslim Uyghur people needed all the publicity it could get.

"The fact that the Chinese government has made it very difficult for my film to be screened has only added a considerable amount of press that I could never afford as a first-time filmmaker," Daniels said.

"So, ironically, the one country that wishes to silence my films gives them great voice, and has allowed as many people to become aware of not only my film but also its subject matter."

Earlier this week, the director of the Melbourne International Film Festival, whose screening of Daniels' movie on Aug. 8 will be attended by Kadeer, told Australian television he had received a call from the Chinese consulate in Melbourne demanding that he pull the biopic and cancel Kadeer's invitation.

"On Friday I received a call from Ms. Chen, who is based here in Melbourne at the Chinese consulate," Richard Moore said in an interview with Australia's ABC television.

"She told me that she was ringing to urge me to withdraw the particular film '10 Conditions Of Love' from the festival."

Moore said he refused to cancel the screening or the appearance by Kadeer, the leader of the exiled World Uyghur Congress (WUC).

Beijing has blamed Kadeer and the WUC for instigating the ethnic riots which enveloped the capital of the Xinjiang Uyghur Autonomous Region, Urumqi, starting on July 5, and in which nearly 200 people died.

Kadeer says the riots were sparked when police used brutal force to suppress a peaceful demonstration by Uyghurs calling for an investigation into the deaths of Uyghur workers at a factory in southern China.

Daniels said his purpose in making the film was to bring people's attention to the Uyghurs, many of whom are unhappy with Chinese rule in Xinjiang, saying they have seen few of the economic benefits enjoyed by the booming population of Han Chinese migrants to the region.

Uyghurs have also complained in recent years of growing interference in their religious life, with government controls on their participation in the annual Hajj pilgrimage to Mecca, Uyghur children banned from mosques, and controls on the wearing of veils for women and beards for men.

"As a documentary filmmaker, my goal is to show stories, and people and cultures that other people don't know very much about," he said.

China's official Xinhua news agency reported Wednesday that three Chinese films had been withdrawn from the festival in protest at the inclusion of Daniels' film.

Three films made by Chinese directors, "Perfect Life," "Petition," and "Cry Me a River," were withdrawn.

In a letter to the festival, Jia Zhangke, producer of the film "Perfect Life" and whose company also produced "Cry Me a River," said he decided to withdraw both movies to protest Kadeer's attendance at the event.

Jia said most of the families of those killed in the deadly July 5 riots believed Kadeer's World Uygur Congress was behind the violence, Xinhua said. Zhao Liang, director of "Petition," followed suit.

The rioting left 197 people dead and more than 1,600 injured, according to official figures. Xinhua said that 633 family homes were also damaged and 627 vehicles smashed or torched.

The news agency quoted an official at the Chinese embassy in Canberra as saying the government is opposed to the screening of the documentary about Kadeer and her attendance at the event.

Daniels said he regretted Jia and Zhao's decision to withdraw.

"I think it's a great loss for the festival not to have these great Chinese films to be screened," he said, suggesting that they had done so under strong government pressure.