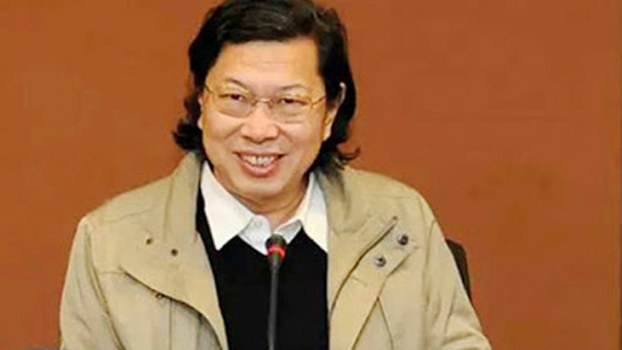 Publisher He Linxia, who was was handed a 10-year sentence by a court in China's Guangxi province, in undated photo.

A court in the southwestern Chinese region of Guangxi has handed a 10-year jail term to the former head of a publishing company for "embezzlement, taking bribes and privately sharing state-owned assets," four years after his initial detention.He Linxia was handed a 10-year sentence by Guangxi's Guanyang County People's Court, the rights website Weiquanwang reported.Prior to his arrest, He was a celebrated figure in China's publishing industry and had been nominated as one of its Top 10 People of the Year.He was detained after he published a number of cutting-edge titles under the publisher's Lixiangguo imprint, including "How the Red Sun Rose," a historical analysis of the role of late supreme leader Mao Zedong in the rise of the Chinese Communist Party during the 1940s, before the founding of the People's Republic of China in 1949.The book was penned by Nanjing-based history professor Gao Hua, and details Mao's role in a series of factional struggles and internal "purges" during the period, using official archives of the ruling Chinese Communist Party.The Lixiangguo titles weren't published through traditional channels, but were sold via the online auction site Taobao, using an account which the authorities later shut down, sources told RFA at the time.Online writer and activist Ye Du said Guangxi Normal University Press had shot to prominence under He's tenure, but has since run afoul of ever more stringent controls on public expression since President Xi Jinping came to power."It's now not acceptable to violate the rules in any form," Ye said, adding that He had been involved in the publication of books banned for sale through traditional channels."Most of Gao Hua's books were published in Hong Kong, for example, 'How the Red Sun Rose', his most famous work.""It showed how Mao Zedong, who had always been a kind of godlike figure in the party-state, won power within the party," Ye said. "You could say that it smashed a lot of the myths that the party has always promoted to the people.""They couldn't let that spread in mainland China," he said.The court judgment against He claimed that he took advantage of his position to embezzle public funds to the tune of 5.71 million yuan, as well as illegally accepting 800,000 yuan in bribes, and losing more than eight million yuan in state-owned assets due to management errors."This is really about creating a deterrent," Ye said. "It steps up pressure on the press and on the publishing industry ... but local bureaucrats also want to show that they are politically correct by handing out harsh sentences, in the current climate of political backstabbing."In February 2017, authorities in China's eastern province of Zhejiang handed down prison sentences to two men for selling "banned" political books from Hong Kong, one of whom was Dai Xuelin, former social media editor at the Guangxi Normal University Press.Dai was handed a five-year jail term by a court in Zhejiang's Ningbo city, while his business partner Zhang Xiaoxiong was jailed for three-and-a-half years.The pair had been found guilty by the court of "illegal business operations," and their conviction came as part of the same investigation that targeted the five Hong Kong booksellers linked to the now-shuttered Causeway Bay Books store and its Mighty Current publishing imprint, the paper said.Judges at a secret trial found that they had bought Hong Kong-published books not authorized for sale across the border in mainland China.A source close to the business told RFA that the pair had been traveling to Hong Kong to buy the books in person, and had been targeted by a nationwide police investigation that questioned "large numbers" of people.Reported by Gao Feng for RFA's Mandarin and Cantonese Services. Translated and written in English by Luisetta Mudie.

One of the commentator's comparisons of the CCP to the US's Democratic Party is absurd and ideological. The CCP bears closest resemblance to the ruling party of other single-party Leninist regimes in Vietnam, Laos, Cuba, and North Korea--and secondarily to the ruling party in authoritarian regimes run by a party strongman such as Cambodia. The poster's use of the right-wing term of abuse "Democrat Party" is a clear signal of Breitbart-type right-wing ideology.

Name a government in one country that does use questionable methods to hide things from the people.

Control all education and media and you control the mind.

The Chinese Communist party shares much in common with the Democrat Party of the United States, particularly their lust for power and their shameless willingness to prosecute and imprison political opponents.

Sounds like an excerpt from Solzhenitsyn's "Gulag archipelago". The soviets also imprisoned political dissidents on the fidings of secret trials, and also handed out ten year prison terms once the court determined (pre-determined) guilt. Another parallel is the prisons themselves, called either "Láodòng Gǎizào" or "láojiào", all used forced labor to rehabilitate. These have been renamed prisons in the current day, but still exist, and retain the slave labor regiment. Truly sobering times... Will mankind ever learn from our past?

Unfortunately, yes. Dictators learn that this method works. The people of China need to rise up and overthrow the communist tyrants.