A Chinese writer gains official recognition in spite of his earlier involvement in pro-democracy movements.
2010-12-27
Tweet 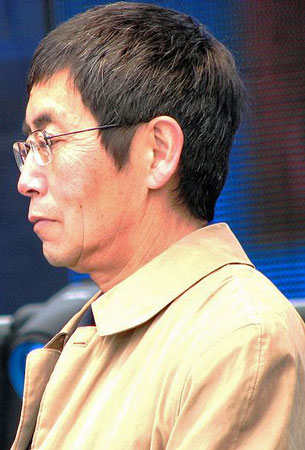 A state-backed Chinese literary magazine has placed exiled poet Bei Dao, one of the darlings of the pro-democracy movement, in the highest rank out of 10 foremost contemporary Chinese poets.

A panel of literary critics hired by Zhongshan, a magazine based in the eastern Chinese province of Jiangsu, propelled Bei Dao, the pen-name of Zhao Zhenkai, to the highest ranking in a recent issue of the magazine.

U.S.-based literary critic Xie Xuanjun said the move was a form of official acceptance for Bei Dao, one of the "Misty" school of poets whose work sprang from the immediate aftermath of the political turmoil of the Cultural Revolution (1966-1976).

He said the government had never seen Bei Dao as an outright opponent, in spite of his exile following the 1989 pro-democracy movement in Tiananmen Square.

"Both before and after 1989, Bei Dao was always fairly close to being a borderline case," Xie said.

"He was a marginal figure, a 'misty' poet," he said. "So gradually, he drifted back inside the system."

Bei Dao, who currently teaches literature at the Chinese University of Hong Kong, has now received an official stamp of approval, Xie said.

"This is definitely an official assessment," Xie added. "It shows that he is definitely in a politically grey area; that he's an acceptable person."

Bei Dao's verse sprang from the backlash against the violence and turmoil of the Cultural Revolution, during which Bei Dao joined the Red Guards.

Later on in Mao's campaign of perpetual class struggle, he was sent, along with a whole generation of middle-class educated youth, to the Chinese countryside, where he was a construction worker.

The Misty school of poets gets their name from their free-verse style, dreamlike imagery, and cryptic language.

Bei Dao's youthful isolation and hardship prompted him to seek a spiritual outlook against the harsh, materialist dialectic of the day.

His novella Waves and subsequent poetry inspired many of the youthful activists during the 1976 April Fifth pro-democracy movement, which saw thousands demonstrate peacefully in Tiananmen Square following the death of premier Zhou Enlai.

The publication was closed down by the authorities just two years later, but was relaunched in Stockholm in 1990.

Bei Dao's poetry was among the first in China to concern itself with the intensely private and subjective struggle of the self amid the revolutionary rhetoric of Maoist China.

According to author Dong Dingshan, the poetic qualities of language in "misty" poetry communicate themselves to the Chinese reader in ways that make them enduringly popular.

"It's indistinct, and blurry. If the language is well-used, then that's what makes it a poem," he said.

"Chinese publishing houses are allowed to publish his books," Zan said. "He has a column in the Shanghai magazine Harvest and in the Beijing magazine Caijing."

"Basically, Bei Dao still has a huge influence inside China. He and Gu Cheng and Hai Zi, who has already died, were poets who were at the peak of their prestige during the 1980s."

The poetic output of that generation has dwindled in recent years, he said.

"But Bei Dao is still very well known on the literary scene. Other people aren't writing much nowadays," Zan said.

He said the Misty poetry school is unlikely to flourish amid the breakneck economic development of post-Deng Xiaoping China, however.

"It's unlikely anyone will be getting 'misty' in the midst of all this ferocious economic activity," Zan said.

Reported by Yang Jiadai for RFA's Mandarin service. Translated and written in English by Luisetta Mudie.