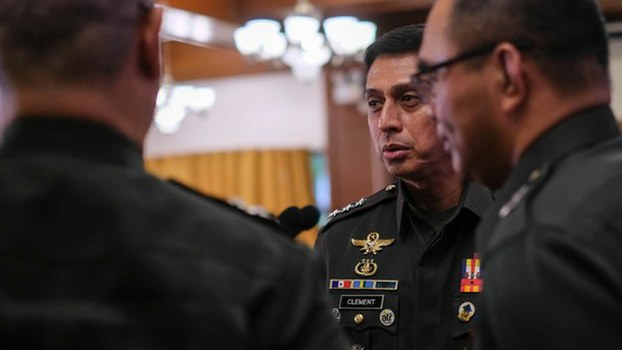 Lt. Gen. Noel Clement (center), the Philippine military’s new chief of staff, is seen with other officers at the Foreign Correspondents Association of the Philippines in Manila, Oct. 10, 2019.

The Philippine military backs diplomatic efforts to resolve tensions with Beijing over the South China Sea, the new commander of the armed forces said Thursday, casting doubt that war would break out despite Chinese forays into contested waters.

While troops are expected to secure or defend Philippine sovereignty, “war is not a primary instrument in resolving international conflict,” Lt. Gen. Noel Clement told the Foreign Correspondents Association of the Philippines (FOCAP) in Manila.

“We support the government’s strategy in resolving this conflict through peaceful and diplomatic means, so as to prevent the escalation of tension between our nations,” said Clement, who was appointed by President Rodrigo Duterte in September as chief of staff of the Armed Forces of the Philippines.

Last week, the Philippine foreign office filed the latest in a series of diplomatic protests with Beijing over Chinese activities in the sea region after Clement told a congressional body that the military had recently spotted Chinese vessels in the waters around Ayungin Shoal.

Ayungin, known as Second Thomas Shoal internationally, lies west of the Philippine island of Palawan. Manila maintains a small contingent of marines who are stationed at Ayungin aboard a dilapidated navy vessel. The ship was deliberately marooned there to serve as a Philippine outpost in the area.

“I do not think it is going to a point that there is [going to be] an actual conflict – meaning a shooting war,” Clement told reporters at FOCAP.

The number of Chinese ships that have been spotted in and around Ayungin seems to be fluctuating because of several factors, including the weather, the general said.

The Asia Maritime Transparency Initiative, which is a program of the Center for Strategic and International Studies, an American think-tank, reported last month that Chinese coast guard ships were patrolling near Ayungin and other shoals also claimed by the Philippines in the South China Sea.

China claims nearly all of the maritime region, considered by security experts as a potential flash point for future war. The Philippines, Malaysia, Brunei, Vietnam and Taiwan also claim parts of the sea.

China has agreed with Southeast Asian nations not to engage in activities that could provoke war, but its actions have gone in the opposite direction. Beijing has expanded and militarized islands it occupies, created airports and installed missiles.

During a trip to Beijing in August, President Duterte tried to raise the South China Sea dispute with his counterpart Xi Jinping, who rebuffed his attempt. A presidential spokesman in Manila said the Filipino leader broached the topic in a “friendly, assertive and unequivocal manner,” but Xi did not respond.

Since becoming president three years ago, Duterte has shifted the Philippines’ foreign policy towards China and Russia, traditional rivals of the United States, Manila’s military ally for the past seven decades.

Shooting war? No, nothing of that sort. However, there will be a turkey shoot. There's nothing in the PH military arsenal that can shoot back and hurt the Chinese. The Filipinos would rather spend their money on anything else rather than spend for a decent military. So if war happens, they will be the turkey in the shooting.