Chinese parents are rushing their babies for health checks and vowing to sue amid a spreading scandal over tainted baby formula.
2008-09-18
Tweet 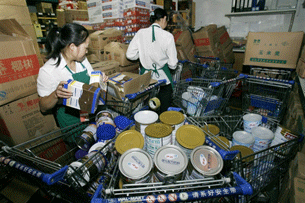 WUHAN, China : Workers remove all brands of baby milk powder from a storeroom at a supermarket in Hubei province on September 17, 2008.
AFP

Chinese parents are vowing to fight for compensation following a scandal over contaminated baby milk powder, which has led to the deaths of at least four infants.

"My child has had a high fever for quite a while, but local hospitals couldn’t find the cause," a parent who brought his baby to a specialist children's hospital in Beijing.

"Something must be wrong. My child was treated in hospital for 16 days, but no cause for the high fever was ever found. We are planning to hire lawyers to deal with these issues," he said. "If our concerns aren't addressed, I will go to Tiananmen Square to protest. I will also raise a banner to get foreign journalists’ attention."

China has announced a recall of tainted baby-milk powder made by a factory joint-owned with New Zealand after four infants died after using the formula. Production has been halted after melamine in the milk powder was found to be causing kidney stones and other complications in babies.

Police have arrested two traders for selling up to three tonnes a day of the powder, made by the Sanlu group, which is 43 percent owned by New Zealand dairy giant Fonterra.

Meanwhile, the Food and Drug Administration warned that Chinese-made baby milk formula was banned in the United States.

Two of the deaths came in the remote northwestern province of Gansu, where poverty levels are high. So far, a total of nearly 500 babies have been reported sick after drinking the formula, 102 of them in Gansu.

Problems have also emerged linked to other milk brands, one of which has surfaced in the southern province of Guangdong among babies drinking a high-end formula called Scient.

A mother surnamed Liang whose baby was found to have kidney problems this week said she had used Scient during the past 23 months. Her baby is now two years old. She said this brand is even more expensive than Sanlu, with claims made that it strengthened infants' immune systems.

"Many parents from the beginning chose Scient because they claim the babies would have a better immune system after drinking it," Liang said. "Scient baby formula is even more expensive than some other kinds of milk powder brands. When we learned the situation, we became so angry, and many parents have spontaneously formed an alliance to fight for compensation."

She said many parents were taking their children to local hospitals, and that there were now long waiting lists for ultrasound scans.

A Scient spokesman acknowledged the problem and promised to act fast to limit damage.

"We will be responsible for all medical fees for the next eight years," he said. "We will act accordingly to national standards. We apologize on behalf of some individual retailers who have not carried out the recall immediately and appropriately."

"We pledge to do a better job of safety inspections in the future," he said. Beijing-based lawyer Li Fangping said his law firm had been consulted in recent days by around 500 people seeking advice about how to take legal action in cases of contaminated milk products.

Several dozen lawyers had said they were willing to provide legal assistance to the victim families, Li said.

"Those who live in the remote and rural areas should take their babies for a medical checkup," he said. "Children who already show symptoms should receive immediate medical attention. We should also make sure that parents who are still unaware there is a problem stop feeding tainted milk formula to their babies,"

Domestic media commentators have called the scandal a matter of national shame, as reports emerge that more than 20 different baby milk brands are now under the regulatory spotlight.

An employee who answered the phone at the Inner Mongolia-based Mengniu Group said safety inspections at the company had been stepped up.

"Safety inspections are very tight, and also very necessary especially after such a big scandal was reported. It’s high time the milk industry got an overhaul," he said.

He denied Internet reports that Mengniu products were also implicated in the scandal.

A Beijing municipal health department official said there were remarkably high levels of melamine in the Sanlu formula.

"As a manufacturer, it is your responsibility to make sure that all of your products are safe," he said.

"All of your products are subject to safety testing. Unfortunately, our country does not test melamine in milk, in the same way that we never test for arsenic in rice because it shouldn’t be there in the first place," the official said.

China has a troubled product safety record with a string of food scares last year.

The first reports that babies were falling sick from the powder appeared in Chinese state media on Sept. 10. Sanlu issued an official recall of products made before Aug. 6 the following day, after trying for several days to recover the powder unofficially from distributors.

Chinese officials said the company began receiving customer complaints in March that babies' urine was discolored and that some had been admitted to hospital.

Taiwan has already moved to ban all imports of Sanlu products.

At least 13 babies died in China's eastern province of Anhui in 2004 after drinking fake milk powder which had no nutritional value.