Internet cafes in China are forced to switch to a Chinese-made operating system, with steep licensing fees.
2008-12-02
Tweet 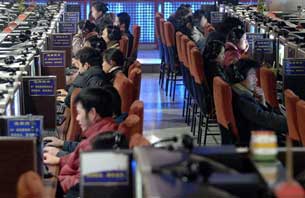 HONG KONG—Authorities in the southeastern Chinese city of Nanchang are requiring all local Internet cafes to replace their Microsoft Windows XP operating systems with a Chinese-made system, Red Flag Linux, according to officials and Internet cafe owners.

An official with the Nanchang Cultural Discipline Team, which oversees the roughly 600 Internet cafes operating in Nanchang city, said the new operating systems were mandatory.

“We have already started installing the new software in all Internet cafes. All of them must have this new one,” the official said.

...the owners will likely reinstall Windows to make their customers happy."

The switch was mandated by the Nanchang Cultural Management Bureau in what it said was an effort to crack down on pirated software, local sources said.

But cafe managers said the new system requires a licensing fee of 5,000 yuan (about U.S. $726), and that even legitimate, non-pirated copies of Windows XP were being replaced.

“Our district cultural management authorities came and installed the new Red Flag Linux in all of our 13 Internet cafes,” one cafe worker said.

“It happened around Nov. 20, and we all paid the 5,000 yuan installation fee, even though we used to use legally purchased Windows XP. But I don’t think this new system is as good as the old one.”

Whether Nanchang authorities were enforcing an order from higher up, and whether the directive might apply elsewhere in China, wasn’t immediately clear.

But reports in China’s official media indicate that Internet cafes in other cities have also switched to Red Flag Linux, with positive coverage in the official press.

It mainly means [a] less secure and private communication environment for netizens in those Internet cafes."

On Aug. 11, 2006, China Computer Journal reported that, after a July 28, 2006 conference in Fuzhou, “relevant leaders from Fuzhou toured a Red Flag Linux promotion Internet cafe. More than 100 computers at this Internet cafe, which is located in the center of the city, have installed the Red Flag Linux software.”

It quoted the manager as saying that “the installation of the Red Flag Linux software has greatly enhanced the stability and security of his system, and that virus attacks, which had caused great damage in the past, have dropped to virtually zero.”

And on Dec. 11, 2007, an official Web site known as “It Experts” reported that Red Flag Linux “satisfactorily resolved many of the problems plaguing the more than 200 Internet cafes in Hohhot, Inner Mongolia, in terms of security, cost-effectiveness, screen clarity, user-friendliness, etc.”

An Internet cafe owner surnamed Chen said the switch was unwelcome. “Every Internet cafe has to install the new software though none of us wants it. There’s no other choice,” he said.

“We’ve been facing a number of new charges. Not long ago, the police asked us to install personal ID scanners for 3,800 yuan (U.S. $550). Now we’re charged for this new software. We don’t know what we will be charged for next. So I wouldn’t pay, and I’m closing my business.”

Cafe owners complained online this week about paying licensing fees for an operating system that can be downloaded free for personal use.

“How much of the charge goes to the Red Flag Linux Co. and how much to the cultural management authorities in Nanchang?” one post read.

An employee at Red Flag Linux’s developer, Beijing Zhongke Red Flag Software Co., confirmed that the system is free for personal use but couldn’t comment on whether businesses are ever required to buy licenses.

Xiao Qiang, director of the China Internet Project at the University of California-Berkeley, said he sees the move to Linux as an effort to tighten censorship and step up surveillance online.

“It mainly means [a] less secure and private communication environment for netizens in those Internet cafes,” Xiao said. “The authorities are gaining more control.”

Bill Xia, president of Dynamic Internet Technology, said he doubted Red Flag would provide a significant advantage in censorship and surveillance—though it requires an additional step for users to install Freegate, a popular anti-censorship utility that Xia’s firm developed.

“You would have pretty much the same censoring power for either Windows or Linux,” Xia said. “It seems like a disadvantage for Internet cafes because Linux tends to have more limited support for different software.”

“Maybe the local Public Security office can make some new money from the Internet cafe owners because they will have to buy it, but the owners will likely reinstall Windows to make their customers happy,” Xia said, calling the 5,000-yuan licensing fee “crazy.”

Chinese who access the Web at Internet cafes are already required to register with their identification cards. Online monitors patrol the Web inside China for content deemed politically subversive or related to gambling, pornography, or illegal business dealings.

Large numbers of Web sites are blocked and dozens of Chinese citizens have been arrested for accessing or sending politically sensitive information over the Web.

Red Flag Linux was created by the Software Research Institute of the Chinese Academy of Sciences in 1999. Financial backing came from a government-owned firm, ShangHai NewMargin Venture Capital.

An employee at Beijing Red Flag Software Co. Ltd who asked not to be named said most users of the operating system were government offices and businesses, which must pay licensing fees to use Windows.

“We custom designed the software according to most Chinese users’ habits by eliminating the English language,” the employee said.