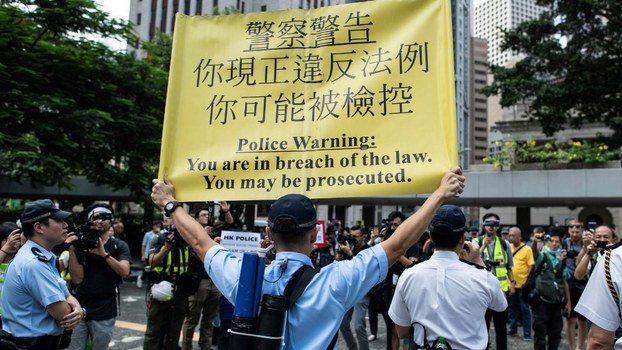 A police officer displays a warning banner during a flash mob rally to show support for pro-democracy protesters in the Central district in Hong Kong, Oct. 11, 2019.

Hundreds of people took to the streets of Hong Kong on Friday to protest allegations of police sexual abuse and torture reported by arrested anti-extradition protesters.

Chanting "Five demands, not one less!" and "Disband the police!" the protesters blocked major streets in the Central business district before marching along them.

Some wore masks in defiance of a hugely controversial mask ban brought in by the administration of chief executive Carrie Lam under colonial-era emergency laws, but most were clad in regular work clothing as opposed to the black protective gear of frontline anti-government protesters.

Police raised a yellow warning flag and accused participants of violating the mask ban, but the warnings had scant effect.

"This is a police warning," they shouted through a megaphone. "You are attending an unauthorized gathering, and some people are wearing masks, in violation of the anti-mask law."

The march came after a student at the Chinese University of Hong Kong said police at the notorious San Uk Ling detention center had sexually assaulted and tortured arrested protesters, leaving many with severe injuries, an account that has been backed up by local media reports citing healthcare workers, protesters and politicians.

A participant surnamed Lee said she was wearing a mask because of illness, and had come out to join the march during her lunch break from her office job.

"What is the problem with wearing a mask?" Lee said. "It is completely unreasonable to discriminate against people wearing masks by suspecting or arresting them."

"Why not treat them equally? The spirit of the rule of law is equality for all," she said.

Lee said she had come out in protest after watching the testimony of the Chinese University of Hong Kong student on Thursday.

"These allegations aren't only being made by one person," she said.

"If people are coming out in public to talk about it, then it is unlikely that this incident didn't take place."

"I get the feeling that Hong Kong right now has changed from being one of the safest cities in the world to somewhere that is very unsafe," she said.

A student surnamed Cheung from the University of Hong Kong also took part in the march wearing a mask, in order to show her opposition to the mask ban.

"The situation is pretty desperate, as we have protesters being sexually abused, arrested for no reason and even dying with their deaths claimed as suicide," Cheung said.

"But young people feel that they have to stand up regardless of these kinds of injuries suffered by protesters," she said. "We have to tell everyone about the sort of suffering the protesters are dealing with right now, that such suffering really is happening in Hong Kong."

"We hope that the government ... will face up to this, and not just stand by and watch," she said.

Meanwhile, foreign correspondents working in Hong Kong have called on police to better protect journalists covering the protests after an Indonesian reporter lost the use of one eye after being hit by a police rubber bullet.

"Violence against journalists covering the unrest has escalated — as have attempts by police to interfere with press coverage, which is a right granted under Hong Kong law," the Foreign Correspondents' Club (FCC) said in a statement after meeting with police.

It cited incidents where police had deliberately targeted journalists with tear gas and pepper spray, as well as attempts by officers to stop the media from filming events by blocking camera lenses and flashing strobe lights at the press.

"Most concerning has been the case of Indonesian journalist Veby Mega Indah, who has been left without sight in her eye after she was hit by a police rubber bullet," the FCC said. "She was visibly identified as a member of the press and was standing apart from protesters at the time she was hit."

The FCC said journalists are authorized to wear masks when covering protests on the grounds of professional safety.

A student at the Chinese University of Hong Kong on Thursday stood up and testified in front of its president Rocky Tuan to sexual abuse and beatings suffered by detained protesters at San Uk Ling Holding Center.

"The police just ordered us around as they saw fit, for example to enter a pitch-dark room, or to take off all of our clothes," the masked woman, who later removed her mask to challenge Tuan to speak out against violence, told the meeting.

"Did you know that there are students at this school who are still attending follow-up medical treatment because of getting beaten up by the raptors [special forces]?" she said. "Did you know that the room they search people in at San Uk Ling is totally dark, and that I am not the only person who suffered sexual violence at the hands of the police?"

"Others under arrest were also sexually assaulted and tortured by both male and female police, and not just one at a time," she said.

Hong Kong police have made more than 2,600 arrests since the anti-extradition movement took to the streets in early June. More than 240 people have been arrested for violating a ban on mask-wearing in public, brought in by Lam last weekend under colonial-era legislation giving her administration emergency powers.

The decision to invoke emergency legislation has paved the way for potentially draconian controls on every aspect of life and business in the city, as it allows the chief executive and ExCo to make new laws considered to be in the public interest, including ordering the inspection and control of publications, maps, photos, and communications and communications methods.