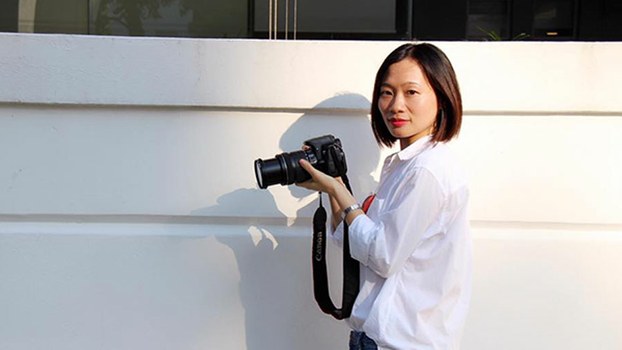 Huang Xueqin, also known as Sophia Huang, a journalist and #me too activist who was detained on Oct. 17 by police in the southern Chinese city of Guangzhou, in undated photo.

Authorities in the southern Chinese province of Guangdong have moved an independent journalist detained after covering the Hong Kong protest movement to an unknown location, RFA has learned."After detaining #MeToo movement leader Sophia Huang Xueqin on 10/17, the Chinese gov't transferred her to "residential surveillance in a designated location," a euphemism for holding her in an unknown location where serious rights abuses are likely," @FreeXueqin, a Twitter account set up to campaign for Huang's release, said.A source close to the case who asked to remain anonymous said Huang is being held in a nameless unofficial detention center, colloquially known as a "black jail."Her family have been threatened by the authorities, and daren't speak out in public about her situation, the source said.Huang was detained on Oct. 17 by police in Guangdong's provincial capital Guangzhou, on suspicion of "picking quarrels and stirring up trouble," a charge that is often used to target peaceful critics of the government.Huang was previously held in Guangzhou's Baiyun District Detention Center, where police have interrogated her about a post she made about Hong Kong's anti-extradition movement on June 10.But now her whereabouts are unknown, leading to concerns that she may be at risk of torture and other mistreatment.Barrister Chow Hang Tung of the Hong Kong Alliance in Support of the Patriotic Democratic Movement in China said she is now very worried about Huang."I think this is quite surprising, actually, because you can only hold someone under residential surveillance in a designated location (RSDL) if they are facing serious charges relating to national security," Chow said. "Picking quarrels and stirring up trouble just doesn't cut it.""RSDL is very dangerous, whether you are put in a guesthouse or a black jail, because nobody knows anything about the environment in those places," she said. "I am very worried about Huang Xueqin, because too many cases of torture have occurred during RSDL."Abuse of detainees

She said Huang had clearly run afoul of the ruling Chinese Communist Party by writing about the Hong Kong protests, a topic that is tightly censored in mainland China."This constitutes serious suppression of the media and journalists," Chow said.Cédric Alviani, East Asia bureau chief for the Paris-based press freedom group Reporters Without Borders (RSF) agreed."Independent reporter Huang Xueqin was brave enough to tough on social topics of vital importance to the Chinese people," Alviani said. "She should never have been detained."He said RSDL is "a particularly harsh form of detention that often leads to the abuse of detainees," and called for Huang's release.Patrick Poon, China researcher for Amnesty International, called on the authorities to make public where they are holding her."Where is she, actually? When will she be allowed to see a lawyer?" Poon said. "We are also worried that she will be put under pressure to 'confess' to these charges, or at the very least, completely silenced.""We are extremely worried about her personal safety right now."Huang, a former reporter for the New Express newspaper and the Southern Metropolis Weekly, had typically reported on rights issues in her work, and has penned articles on sexual harassment, gender, pollution and vulnerable groups in Chinese society.Travel ban

Before being detained, she had been an outspoken member of the country's #metoo movement, and had carried out a survey of sexual harassment and assault cases among Chinese women working in journalism.Huang, 30, originally planned to study law in Hong Kong but had her travel documents confiscated in August.Many women who have tried to defend human rights in China have faced persecution, including arbitrary detention, torture and inhumane punishment by medical deprivation, according to the Chinese Human Rights Defenders (CHRD) network.Huang was already under a travel ban imposed following her return from a trip to Hong Kong and Taiwan from February through August.She had previously assisted in the investigation and reporting of a number of high-profile sexual harassment allegations against professors at Peking University, Wuhan University of Technology, Henan University and Sun Yat-sen University in Guangzhou.Huang was present at a million-strong protest in Hong Kong on June 9 against plans to allow extradition to mainland ChinaRSF said China is the largest prison in the world for journalists with at least 120 detainees and ranks 177th out of 180 countries and territories in the RSF World Press Freedom Ranking 2019.Reported by Ng Yik-tung and Sing Man for RFA’s Cantonese Service, and by Gao Feng for the Mandarin Service. Translated and edited by Luisetta Mudie.