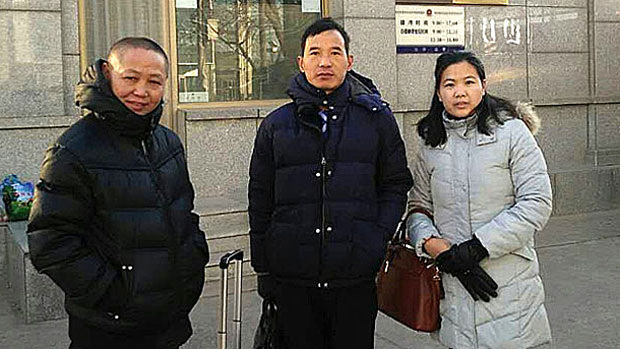 Authorities in the Chinese capital have changed the charge on which they are holding a top human rights lawyer to subversion, a far more serious charge than the public order charge on which he was initially detained.

But Yu’s case is now being transferred from Beijing to his hometown of Xuzhou city in the eastern province of Jiangsu, and he will be held there on suspicion of “incitement to subvert state power,” his lawyer Huang Hanzhong told RFA.

“The authorities summoned Yu Wensheng’s wife … and told her that the charges against him were being changed,” Huang told RFA. “By charging him with incitement to subvert state power, the authorities are finally showing their displeasure over Yu’s exercising of his right to freedom of speech.”

He said Yu will likely face huge pressure to “confess” to the charges, as other rights lawyers detained in a nationwide crackdown since July 2015 have done. Some who have undergone such interrogations and refused to “confess” have reported severe torture at the hands of police.

“I think we will see a repeat of the forced confessions under interrogations with Yu Wensheng,” Huang told RFA.

Fellow defense attorneys Ma Wei and Song Yusheng, who were hired by Yu’s wife Xu Yan to defend her husband, have been denied permission to visit him at the police station where he is being held.

Xu has told RFA she believes the charge is trumped up, and that the real reason for Yu's detention was an open letter he wrote ahead of the second plenary session of the ruling Chinese Communist Party's central committee earlier this month.

The letter called for an end to party control of China's People's Liberation Army, exercised via the Central Military Commission, and for an end to the parliamentary advisory body, the Chinese People's Political Consultative Conference (CPPCC), which the letter said has no basis in the country's constitution.

Yu was detained the morning after he published the letter online.

Hong Kong human rights lawyer Albert Ho said he believes the new charge indicates a clear motive of political revenge on the part of the government, probably due to Yu’s refusal to cooperate with the initial investigation into the lesser charge.

“These are barbaric tactics that they now employ against anyone who refuses to surrender and who won’t show public remorse. They have employed these high-pressure tactics in most of these cases,” Ho told RFA.

“Their homes are searched, their loved ones are treated as guilty by association, and they are put under huge pressure to ‘confess,’” he said. “They all get the same treatment.”

“I am shocked and angry, and call on the Chinese government to cease immediately its persecution of lawyers,” he said.

Yu, 51, has defended a number of clients in politically sensitive human rights cases in recent years, including forced evictees and the families of victims of a tainted vaccinations scandal in the eastern province of Shandong.

In 2014, he was held by police for 99 days for showing public support for the pro-democracy Occupy Central movement in Hong Kong.

Yu was stripped of his professional license to practice after he joined the defense team for detained fellow lawyer Wang Quanzhang, held in the northern city of Tianjin amid a nationwide crackdown on more than 300 lawyers and rights activists that began in July 2015.

Reported by Ng Yik-tung and Dai Weisen for RFA’s Cantonese Service, and by Kou Tianli for the Mandarin Service. Translated and edited by Luisetta Mudie.