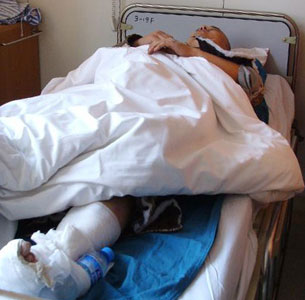 Zhu Hongxing lies in the hospital after being treated for a broken leg, Nov. 28, 2010.
Photo provided by a human rights activist

An eviction activist in the eastern Chinese city of Hangzhou says that he was beaten up by a group of unidentified thugs, landing him in hospital with a broken leg, and that police are refusing to investigate his complaint.

The Nov. 28 attack came even as a top Beijing official asked local governments to treat those who lodge official complaints as if they were "their own family."

Zhu Hongxing, of Xinfeng village in Hangzhou's Jianggan district, said he was set upon by a group of black-clad men who beat him with iron bars.

"They used a fake parcel, that [looked like] it was from the post office," Zhu said, speaking from his hospital bed, where he is awaiting surgery to put steel plates into his leg, which was smashed in the attack.

"They called me outside to pick it up, and then five or six of them wearing black clothes beat me with iron bars," he said.

Last week, top law enforcement official Zhou Yongkang told a conference on petitioners in eastern China's Shandong province that "scientific and democratic policymaking" was the best way to reduce the thousands of petitions that currently besiege the Chinese government.

Officials should make more effort to assess the social-stability risks of major construction projects and policies, he said.

"Governments must not approve projects opposed by the overwhelming majority ... and [must] address the public's legitimate demands," Zhou said.

He said local officials should meet with those who complain about their actions, read their letters, and treat them like members of their own family, citing the most common complaints as those involving house demolition and land acquisition.

Sunday's attack in Hangzhou was witnessed by a number of villagers and recorded on local security cameras, although Zhu said the police later deleted the crucial scenes.

"There was a whole gang of them, and they beat him unconscious," Zhu said.

"We called 110 [emergency services], but the police took 20 minutes to arrive, even though it's only five minutes away."

Another villager said he saw a white van with no registration plates pull up near Zhu Hongxing's house at around 10:00 a.m. on Sunday.

Zhu said several villagers had also witnessed the police taking away evidence of the attack after they responded to the emergency call.

"Two people showed up ... from the Jianqiao police station," he said. "They took away the bars that had been used to beat me. There are witnesses who saw them do this."

"There is even CCTV footage of this. They even took away the fake parcel. There was a picture of the guy who did this. They also deleted the video footage of me being beaten. There are five or six security cameras [near our home]," Zhu added.

An officer who answered the phone at the Jianqiao police station said he knew nothing of Zhu's case.

"What do you mean, they wouldn't open an investigation? I haven't heard anything about this," he said.

"If the case has been reported to us it will have been registered, and one of our officers would definitely pay them a visit," he said.

Zhu said the attack was the latest in a string of attacks on local residents who had tried to complain after they were forcibly evicted from their homes, with no compensation paid.

"It's to do with eviction," he said. "We have been trying to sue them for the past two years."

"They have been using our land illegally, illegally evicting us, and demolishing our homes and illegally appropriating land. This is a form of revenge that they are taking [on us]," he said.

Zhu and his family were evicted from their home near the Hangzhou East Railway Station, which was demolished in May 2008 to make way for an expanded rail hub.

"They said that there would be a rail hub constructed there. I believed them. Later, I looked over the documents and they weren't in order at all," he said.

"It was a property development instead ... The developer had managed to make off with all the village's assets without a single formality ... I have all the evidence here," he said.

Zhu, together with around 20 other local residents, had made several trips to Beijing to file a lawsuit at a higher court, villagers said, but the court had never set a date for a hearing.

Instead, the villagers had been subjected to various forms of pressure, intimidation, and physical attacks, of which the attack on Zhu wasn't the first, they said.

They said the involvement of local commercial interests, government officials, and the courts mean that the police are unlikely to pursue Zhu's attackers with much enthusiasm.

Last week, authorities in the northern port city of Tianjin warned activists not to try to organize a demonstration of thousands of local petitioners by means of a signature campaign.

"We thought the more people we could get to attend the better," said petitioner and organizer Zhang Jianzhong.

Another organizer, Wang Zhongxiang, said he had also been warned by authorities not to apply to stage the demonstration.

"This is just one of the tricks they use," Wang said. "They warn you not to apply, but they won't tell you the reason."

Reported by Qiao Long for Radio Free Asia's Mandarin service and by Grace Kei Lai-see for the Cantonese service. Translated and written in English by Luisetta Mudie.