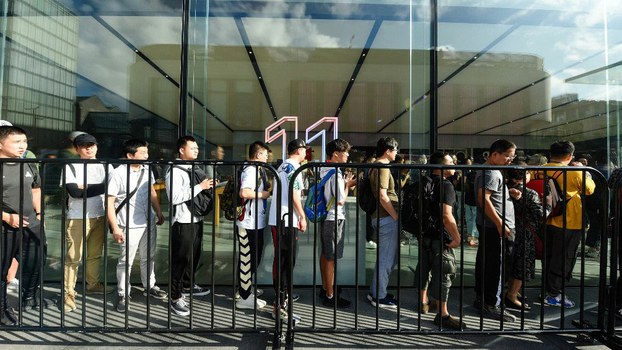 Customers queue outside an Apple store to buy the latest iPhone models in Hangzhou in China's eastern Zhejiang province on Sept. 20, 2019.

Chinese official media on Wednesday hit out at Apple over an app in its online store that tracks the movements of Hong Kong police, as well as the presence of a well-known protest anthem on Apple Music."There is a map which says it provides traffic information to facilitate travel, but in fact it facilitates illegal activities by informing users of the whereabouts of the police," ruling Chinese Communist Party mouthpiece the People's Daily said in an editorial.It said Apple hadn't looked closely at the escalating violence in Hong Kong since the anti-extradition movement began in early June."Is it Apple's intention to open the door to violence and chaos, to be an accomplice to it?" the paper said.The app, HK.map live, isn't mentioned by name in the article, but it enables users to add real-time reports of police sightings across the city and suggest safe zones and escape routes for protesters with no police presence.App users can view a city-wide map dotted with car symbols to denote the presence of police, or annotate an OpenStreetMaps.com map of Hong Kong with labels linked to their own sightings.At around 10.30 p.m. local time on Wednesday, the app showed a cluster of police sightings around Ma On Shan, where protesters had gathered in a shopping mall to protest the arrests of five security guards the night before.Some of the labels used the word "dogs" to refer to the police, while others used a dog icon. Still others gave information about the type of police, what equipment they carried, and in what direction they were heading."No one wants to pull Apple into the turmoil that is happening in Hong Kong," the People's Daily editorial said. "But now ... Apple has to jump in itself, to mix business and politics and even business activities and illegal activities.""This kind of unwise, reckless behavior will cause much trouble for Apple, and Apple needs to think about that very carefully," the paper warned. "To allow such poisonous software to become popular is a betrayal of the feelings of the Chinese people."On-line gamer stripped of title

In democratic Taiwan, whose leaders have been outspoken in their support of the Hong Kong protesters, National Taiwan Cheng-chi University literature professor Chen Fang-ming said Apple is the latest in a string of companies to feel the wrath of the Chinese Communist Party."They are now on a witch-hunt, because anyone who wants to make money in China has to follow their rules," Chen said. "You will be included in their controls on freedom of speech."The attack on Apple came as a top online gamer from Hong Kong said he has no regrets about shouting "Reclaim Hong Kong! Revolution in our time!" in Mandarin during an interview after winning a Hearthstone Grandmasters gaming tournament.Game-makers Blizzard stripped Ng Wai-chung, 21, of his title and prize-money, saying he had breached the terms of the tournament.Ng told journalists: "I don't regret saying that stuff. And even now, I don't regret it at all."Chinese internet giant Tencent holds a five percent stake in Activision Blizzard, Blizzard's parent company.

Apple's troubles in China follow scrapes by numerous other western corporations who have run afoul of Chinese nationalism, often whipped up by state media, and come in the wake of the National Basketball Association (NBA)'s dispute with Beijing after Houston Rockets manager Daryl Morey Tweeted his support for the Hong Kong protest movement.

The NBA has postponed Wednesday's scheduled media sessions in Shanghai for the Brooklyn Nets and Los Angeles Lakers, leaving it unclear if the teams will play in China this week as scheduled, the Agence-France Presse (AFP) news agency reported.

In the fallout from Morey's tweet, major Chinese sponsors including Chinese smartphone maker Vivo have cut ties, stores that sell NBA merchandise were removing Rockets-related apparel from shelves and state broadcaster CCTV said it will not broadcast the Lakers-Nets games, AFP reported.
Reported by Qiao Long for RFA's Mandarin Service, and by the Cantonese Service. Translated and edited by Luisetta Mudie.

Pooh bear is so sensitive.