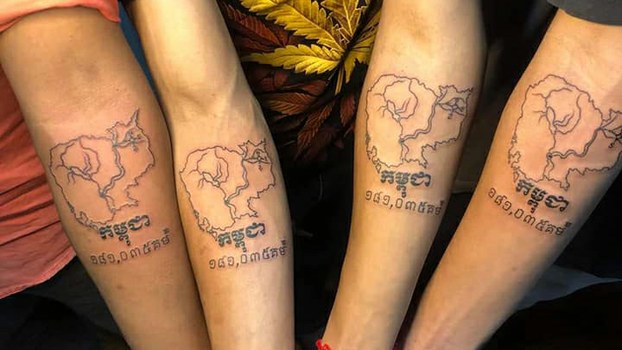 An increasing number of youths in Cambodia are tattooing the country’s map on their bodies in protest of recent legislation that they say could lead to the ceding of territory to Vietnam, amid a long-running dispute over the border between the two neighbors.

Earlier this month, Cambodia’s Senate approved a draft law on a supplementary treaty for the country’s border with Vietnam which is based on a combination of border treaties the two countries used in 1985 and 2005, and would recognize 84 percent of the border’s current demarcation.

Border activists and members of the opposition Cambodia National Rescue Party (CNRP) say that the legislation will cede land to Vietnam because it is based in part on the 1985 treaty, which was enacted after Vietnam invaded Cambodia in 1979 to oust the Khmer Rouge regime and installed a puppet government to run the country.

Speaking to RFA’s Khmer Service, a young man from Siem Reap province’s Pok Tho commune said he and others decided to tattoo a map of Cambodia on their bodies because they want to ensure that the government maintains all 181,035 square kilometers (69,900 square miles) of the country’s territory while deciding how to demarcate the border.

“I got a tattoo of the map because I want to prove that I love the country,” he said, speaking on condition of anonymity.

“Recently, the Senate and National Assembly (parliament) adopted laws on border demarcation based on the supplementary treaties of 1985 and 2005 with Vietnam. To us, as youths, we are concerned that we are losing land, so I tattooed the map to protect it.”

The youth said he doesn’t know how many young people are tattooing themselves with the map of Cambodia, but suggested that it is becoming increasingly popular to do so.

Var Kimhong, the government’s senior minister in charge of the border, refused to comment on the popular tattoo, saying only that getting one is a personal decision.

“The government is responsible before the history [over the border issue],” he said. “What are the youth responsible for?”

CNRP lawmaker Um Sam An said the movement shows that the youth are increasingly protective of the country and interested in politics, and that they are concerned about the ceding of territory amid ongoing border conflicts in Ratanakkiri and Mondulkiri provinces, which are located alongside Vietnam.

Animosity between Vietnam and Cambodia goes back centuries, but was heightened by the Vietnamese war that ousted Cambodia’s Khmer Rouge regime and paved the way for long-ruling prime minister Hun Sen’s ascension to power.

Accusations over the demarcation of the border between Vietnam and Cambodia have become a prominent feature in Cambodian politics as Hun Sen’s opponents have attempted to paint the strong man as a tool of the Vietnamese.

Vietnam put Hun Sen the dictator into power. No democracy or fair elections. Hun Sen has been in power for more than 34 years and has ceded land to Vietnam and now China. Cambodia's future is in peril unless something is done. Communist Vietnam continues to oppressed the more than 14 million Khmers in Vietnam. Montagnards, Chams, and other minorities also suffer oppression under Communist Vietnam.