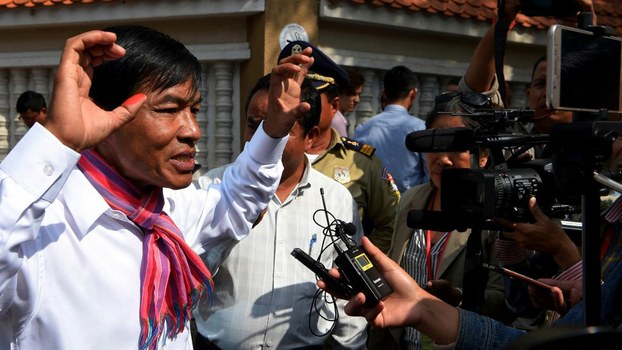 Oun Chhin (L), a former journalist for Radio Free Asia, speaks to media after a hearing outside the Phnom Penh municipal court, Oct. 3, 2019.

The judge in Cambodia’s trial of two former Radio Free Asia journalists on Wednesday called for a reinvestigation of the espionage and the production of pornography charges, a ruling that a rights expert said was “ridiculous and punitive” and showed the weakness of the case.

Trial judge Uy Vannak’s decision to order the investigating judge to re-investigate Yeang Sothearin and Uon Chhin's passing of a hard drive to the U.S. embassy, the contents of a video, and a report about exiled opposition leader Sam Rainsy resulted in the second postponement of a verdict first expected to be delivered Aug. 30.

“I am very disappointed by the court decision,” Sothearin told reporters outside the Phnom Penh court after a hearing observed by 30 observers, including U.S. embassy officials, UN human rights officers, local human rights monitors and local and international journalists.

“It's over two years that the court has been investigating our cases. That should be enough time. I feel that the court intends to continue to put pressure on us and restrict our freedom because of our background of having worked for RFA,” he said.

The lawyer for the two men, Som Chamroeun, told RFA's Khmer Service said, “according to the law, the principle of presumption of innocence until proven guilty, when there is no evidence against them, the defendants should be free from any charge.”

"The time used for investigation should have been enough and the trial hearings in which they were questioned and challenged were already detailed and elaborate," he said.

Sothearin and Chhin were taken into custody in November 2017 and charged with “illegally collecting information for a foreign source” under Article 445 of the Criminal Code. Production of pornography were later added to the charges against them, and they face a prison term of from seven to 15 years.

"This reinvestigation drags out a two-year ordeal for RFA’s former journalists. We still hold out hope that they receive the justice they deserve, and that the case and charges are dismissed," said Rohit Mahajan, the Washington-based RFA’s spokesman.

"Yeang Sothearin and Uon Chhin, along with their families, have already suffered enough," he added in a written statement.

International and Cambodian human rights groups both swiftly denounced the decision, arguing that it showed how little evidence the government was able to present.

“The court’s decision today to re-investigate the case because there is not enough evidence is both ridiculous and punitive. There was never any real evidence these two journalists committed espionage in the first place,” said Phil Robertson, the Bangkok-based deputy Asia director of Human Rights Watch.

“This case was politically motivated from day one and the judge’s admission there is no real evidence should have prompted the dismissal of the case, not a re-investigation which will plunge these journalists back into a never-ending nightmare,” he said in a statement.

“The charges against the journalists were baseless. There is no proof of the so-called ‘providing information that undermines the national defense,' whatsoever,” said Am Sam Ath of the Cambodian human rights group Lichado.

"Today, the court’s decision proves that the court does not have enough evidence against them. Producing evidence against them is the burden of the prosecution," said Cambodian Center for Human Rights Director Chak Sopheap. She said the charges should be dropped in the absence of conclusive evidence.

The trial of Yeang Sothearin and Uon Chhin concluded on Aug. 9 and a verdict was expected on Aug. 30, but it was delayed to Oct. 3.

Both journalists have maintained that they are innocent of the charges against them, and say they will be vindicated through the courts, while local and international rights groups have condemned their arrests as part of a wider attack on the media in Cambodia and called for their release.

RFA closed its nearly 20-year-old bureau in Phnom Penh on Sept. 12, 2017 amid the crackdown by Hun Sen’s ruling Cambodian People’s Party (CPP) that also saw the Supreme Court dissolve the main opposition Cambodia National Rescue Party (CNRP) a month later, paving the way for the CPP to sweep the ballot last year, effectively making Cambodia a one-party state. Hun Sen's government has throughout 2019 harassed and threatened CNRP members, arresting 30, while subjecting at least 160 others to questioning by court or local authorities.

The arrest of Chhin and Sothearin came after a warning from Cambodia’s Ministries of Information and Interior that any journalists still working for RFA after its office in the capital closed would be treated as spies.

They were released on bail in August last year, but were placed under court supervision, which barred them from changing their addresses or traveling abroad, and required them to check in with their local police station once a month.

Cambodian journalists working for RFA had reported over the years on corruption, illegal logging, and forced evictions, among other stories largely ignored by pro-government media, and authorities had already closed independent radio stations carrying RFA reports, using a pretext of tax and administrative violations.

Paris-based Reporters Without Borders ranked Cambodia 142nd out of 180 countries in its 2018 World Press Freedom Index, down from 132nd in 2017, citing the crackdown on independent media in the lead up to last year’s election.

I wish the prosecutors and judges are INDEPENDENT.