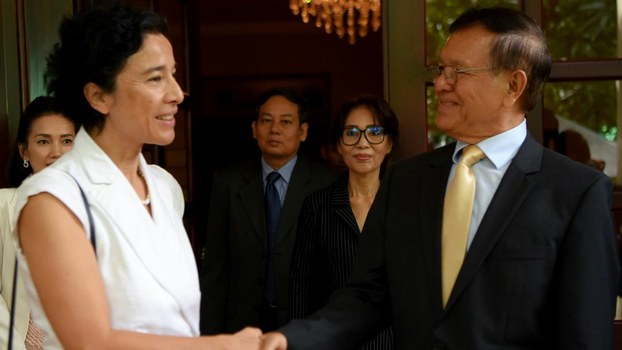 In a scathing report, the European Union warned Cambodia that it has not taken enough steps to prevent a loss of its special trade privileges, noting particularly "further deterioration" of its human rights record since a review process was launched nine months ago.

The confidential 70-page report, which was sent to authoritarian Cambodian Prime Minister Hun Sen's government this week, arrived at an ominous conclusion after a comprehensive review of critical areas such as civil, political, labor, social and cultural rights.

Official sources who had access to the much awaited report, which was marked "sensitive," shared it with RFA on condition of anonymity.

The report came ahead of a looming February 2020 deadline for the EU to decide whether to remove Cambodia from a scheme that gives the world's poorest countries duty-free, quota-free access for all products except arms and ammunition.

The report noted "further deterioration" of civil and political rights and only "tangible progress" in land and labor rights.

The report outlined the European Commission's preliminary findings of the investigation triggered in February 2019 under the procedure for a potential withdrawal of Everything But Arms (EBA) trade preferences enjoyed by Cambodia.

The EBA arrangement is one pillar of the EU's Generalised Scheme of Preferences (GSP), which may be suspended in case of "serious and systematic violation of principles" laid down in the human rights and labour rights Conventions listed in Annex VIII of the GSP Regulation.

'We are very concerned'

The European Commission on Tuesday announced it had finalized its preliminary report on suspending Cambodia's trade preferences but did not publish the report.

"We are very concerned about the human rights situation there," EU trade commissioner Cecilia Malmstrom said on Twitter. "The Cambodians now have one month to respond and we will make our final decision in Feb next year," she said.

Cambodia is the second-largest beneficiary of EBA trade preferences, accounting for over 18 percent of all imports to the EU market under the EBA scheme in 2018.

The EU launched the process to strip Cambodia of its preferential trade terms following the arrest of opposition Cambodia National Rescue Party (CNRP) President Kem Sokha and the banning of the popular party ahead of elections last year.

The ban and a crackdown by Hun Sen on NGOs and the media paved the way for his ruling Cambodian People’s Party (CPP) to win all 125 seats in parliament in the July 2018 elections.

Among the conditions the EU has called for is the dropping of all charges against Kem Sokha, who was arrested in September 2017 for “treason,” two months before Cambodia’s Supreme Court banned the party for its role in an alleged plot to topple the government.

Since self-exiled CNRP leader Sam Rainsy in August announced his intention to return to Cambodia, authorities in Cambodia have arrested and jailed many of those who have voiced support for the plan, which the government calls part of a “coup” attempt.

Sam Rainsy said this week that unless Hun Sen improves Cambodia’s rights record to satisfy the demands of the EU and maintain EBA status—reforms he is also seeking for the country—“hundreds of thousands of workers will lose their jobs.”

The EU report also cited the clampdown on media freedom in the country, highlighting among other cases that of two former Radio Free Asia journalists, who rights groups say have been slapped with bogus espionage charges.

Uon Chhin and Yeang Sothearin were arrested on November 14, 2017 but have they are still awaiting a verdict.

A judge in Phnom Penh ruled last month that there was insufficient evidence against the two men but sent the case for re-investigation instead of dismissing it.

“The case against Chhin and Sothearin should have been dropped long ago, but Cambodia’s government seems intent on using baseless charges as a warning to other independent journalists,” Phil Robertson, deputy Asia director at Human Rights Watch, said Wednesday.

“The never-ending case is part of the government’s campaign to silence all critical reporting in the country.”

The EU report also said that while tangible progress has been made in resolving land disputes, "shortcomings" still existed in the areas of land registration, titling provisions and the lack of appropriate and impartial review as well as addressing the rights of the indigenous population.

"Further efforts are needed in order to establish an appropriate legal framework legal framework to ensure transparent and inclusive mechanism for the resolution of land disputes."

On labor rights, it said while tangible progress has also been made in certain areas, "this progress will need to be sustained."

It called for the launching "without delay" of a new round of negotiations with the social partners to continue with the revision  of the Law on Trade Unions.