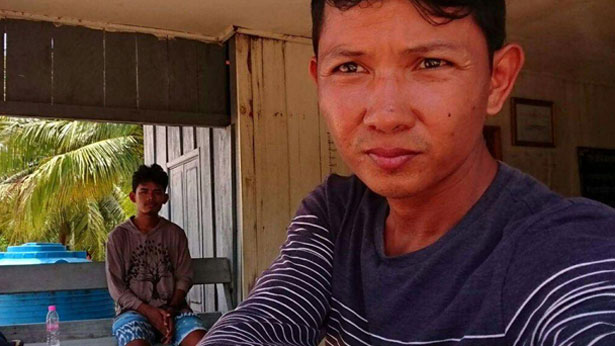 Dim Kundy (left) and Hun Vannak (right), photo taken before on September 12, 2017 before their arrest.
Photo courtesy of an RFA listener.

Activists Dim Kundy and Hun Vannak had been detained since Sept. 12 in Koh Kong province on charges of inciting others to “commit crimes” and violations of privacy.

The pair were taken into custody while taking photos of dredging operations along the Cambodian coast carried out by a firm linked to the ruling Cambodian People’s Party. The activists' NGO, Mother Nature, formally disbanded days after the arrests, citing harassment and pressure on staff from Cambodian authorities.

Friday's Koh Kong Trial Court sentenced the two men to a year of imprisonment and fines of 1 million riel  (US$250). But the court suspended or waived seven months, leaving them with five months in prison, with credit for time served since mid-September.

Dim Kundy and Hun Vannak's families and supporters, who were present in court when the verdict was announced, rejected the sentences as unjust, but said with the men's release likely in two weeks, they were not contemplating an appeal.

“Even though that my son and his colleague will be out of the prison soon I am not happy with the court ruling. They have been detained for having committed no wrongdoing," Ty Mary, Hun Vannak’s mother, told RFA's Khmer Service.

Duong Saktheary, Kim Kundy’s mother, told RFA she will wait until her son is released before considering her next moves.

“I call on the court to drop all the charges and the fine imposed on my son. It’s very unjust for him," she said.

Mother Nature founder Alejandro Gonzalez Davidson, who has been based in Spain since he was expelled from Cambodia in 2015, had predicted before Fridays's hearing that the activists would not stand a chance in a courst system undr heavuy inflence from local tycoons and politicians.

“It’s so amazing that the court can charge any one without having to resort to evidence or witness testimony," he told RFA.

In Kongchith, provincial coordinator for human rights group Licadho, called the verdict "nothing short of an intimidation and threat to other young people."

“Those two young men have volunteered to serve the country. They do not get paid for what they are doing. They should not be punished like this," he told RFA.

Registered with Cambodian authorities in 2013, Mother Nature has worked over the years to protect Cambodia’s environment, exposing irregularities in Cambodia’s trade in dredged sand with foreign countries and helping villagers organize to protect their land.

Several of the group's members have been harassed and jailed over the years.

In July 2016, activists Try Sovikea, 28, San Mala, 26, and Sim Somnang, 31, were sentenced to 18 months in jail for threatening to destroy a barge belonging to a sand-dredging company the year before.