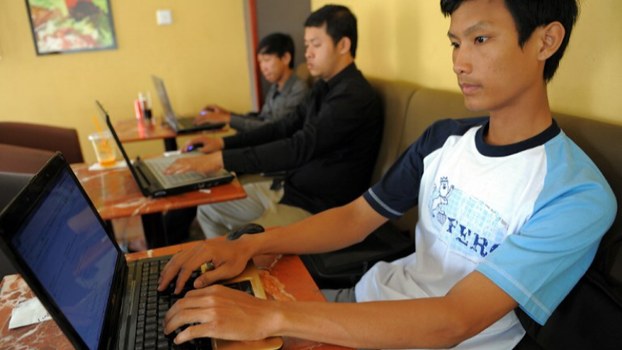 Cambodians surf the web at an Internet cafe in Phnom Penh, in a file photo.

More than 100 NGOs expressed “grave concern” Friday in response to the Cambodian government’s decision to monitor and “control” online news ahead of a controversial general election in July, calling the move a “contravention of constitutional and international human rights guarantees.”

In a 10-article “Prakas”—or regulation adopted by a minister—dated May 28, but released on Monday, Cambodia’s ministries of information, interior, and posts and telecommunications jointly declared the formation of an inter-ministry working group that will investigate media groups and individuals found to be spreading “fake news” online.

The Prakas is aimed at “controlling all dissemination of information” that is deemed to “threaten the defense and security of the nation, relations with other countries, the economy, public order, and discriminates against the country’s customs and traditions,” the announcement said, and authorizes the ministries to take action against offenders and the internet service providers who host their content.

In a joint statement on Friday, 117 NGOs—including rights group Licadho and electoral watchdog Committee for Free and Fair Elections in Cambodia (COMFREL)—condemned the directive, which they said “threatens the privacy rights and freedom of expression of every single internet and social media user in Cambodia.”

The Prakas “further diminishes the limited space left for public debate following months of attacks on media freedoms,” it said, referring to a ongoing crackdown by Prime Minister Hun Sen that has also targeted the political opposition and NGOs, and is widely viewed as part of a bid to ensure his ruling Cambodian People’s Party (CPP) stays in power following a July 29 general election.

The NGOs dismissed the list of “illegal” content in the Prakas as based on “catch-all definitions” and a “clear case of government overreach and censorship” beyond what is necessary to maintain public order and national security.

“The order can be used to stifle all forms of public discussion in Cambodia,” they said, and “virtually any opinion which authorities consider unacceptable could fall under its vague, sweeping criteria.”

The statement suggested that blocking of content and closure of social media accounts “seems to be at the discretion of the ministries,” and lacks judicial oversight or the right to appeal.

The NGOs also warned that the Prakas could be used to target “private online communication.”

According to Monday’s announcement, the Ministry of Posts and Telecommunications will also require all internet service providers in Cambodia to install software and other tools that can be used to monitor and “easily filter or block any websites, accounts or social media pages that are deemed illegal.”

The NGOs said that by requiring them to do so, “internet users could be eavesdropped on at the government’s behest by the very services they are paying for.”

“This ministerial order represents a serious threat to the Cambodian people’s constitutional rights to privacy and freedom of expression,” they said, noting that while those rights can be limited by public order and national security considerations, the government can only do so when it is “truly necessary and proportionate.”

“This order represents a severely disproportionate restriction on the Cambodian public’s human rights,” the statement said.

“Therefore, we … call for its immediate revocation.”

Also on Friday, Cambodia’s monarchy lashed out at critics who had questioned the authenticity of a royal message that urged the country’s citizens to vote in July’s election, which observers expect will be neither free nor fair following the dissolution of the main opposition Cambodia National Rescue Party (CNRP) in November over its alleged involvement in a plot to topple the government.

“During the past few days, some biased people have accused the king’s letter … of being faked,” said a press release issued by the Ministry of the Royal Palace.

In a letter dated May 18, but released to local media on Tuesday, King Norodom Sihamoni said that Cambodia’s election process is in keeping with the principles of pluralism and called on voters to ignore “warnings and threats” from any individual or political party that might prevent them from casting their ballot next month.

The royal endorsement followed repeated threats by Cambodia’s government to prosecute anyone calling for a boycott of the election, after the CNRP told supporters to avoid the polls because it had been banned from participating.

Former CNRP President Sam Rainsy, who is living in self-imposed exile to avoid several convictions widely seen as politically motivated, has published several posts to his Facebook account since the letter was issued, suggesting that it was either “a forgery or written under duress, and thus legally worthless.”

On May 23, Sam Rainsy had written an open letter to King Sihamoni, urging him to refrain from endorsing the election and bending to the will of the CPP in calling on the public to vote, given the country’s political situation. In his recent posts Sam Rainsy suggested the king’s letter had been backdated to avoid the “shame” of writing it after his request.

Political analyst Lao Mong Hay had also called the king’s letter into question, telling RFA on Thursday that it was more traditional for the monarch to address such a significant event in a speech carried on television or the radio and wondering why it was released nearly three weeks after it was signed.

The monarchy has come under considerable pressure from the CPP during Hun Sen’s rule, and the prime minister once threatened to change the country’s form of government to a republic if the current king’s late father, King Norodom Sihanouk, refused to sign a supplemental treaty administering Cambodia’s border with Vietnam.