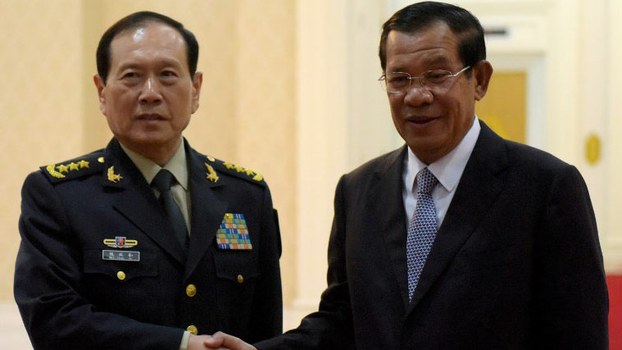 China and Cambodia announced on Tuesday that Beijing has pledged $100 million in military grants for training and equipment for the Cambodian military, a move one critic said would help Prime Minister Hun Sen resist international pressure over his crackdown on political opponents in an election year.

Wei’s visit was “to implement any deals signed between the two countries, especially any deals brokered between Hun Sen and Chinese President Xi Jinping in the past., and especially to promote and deepen mutual military cooperation,” Hun Sen posted on his Facebook page.

China has supported Cambodia with millions in aid and trade benefits in recent years, garnering the Phnom Penh government’s strong support for Chinese positions in the 10-member Association of Southeast Asian Nations (ASEAN) and other regional diplomatic groupings.

China has backed Hun Sen, who has ruled Cambodia for 33 years, stepping in with arms sales when western countries have shunned Phnom Penh over human rights abuses.

Analyst Hang Vitou told RFA’s Khmer service he was concerned about the latest Chinese aid announcement, which comes in the lead up to national elections on July 29, and with Cambodia estranged from most traditional aid donors in Europe and North America.

Hun Sen has accused the United States of being behind a plot by the opposition Cambodia National Rescue Party (CNRP) to topple his government, arresting the party’s president, Kem Sokha, in September and having courts dissolve the party in November for treason.

“Cambodia will get more criticism from the West and the grant will encourage (Hun Sen’s regime) to continue the election without the National Rescue Party,” said Hang Vitoui, head of the Young Analyst Group.

“The grant will also motivate Cambodia to abuse human rights,” added the analyst, who said he believed reliance on China would harm Cambodia’s independence.

Hun Sen is selling Khmer Souls and Lands to China, to fatten his own pocket!