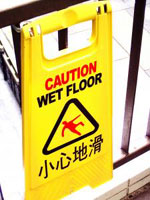 China's insurance market will develop as individuals and companies begin to make their own provision for risk. Photo: C. Gonsalves

Increasingly, China is seeing a risk revolution, as state-owned enterprises (SOEs) are transferring responsibility for social security to insurance companies, employers, and individuals.

In a recent example of the migration of responsibility, the Beijing Municipal Health Bureau plans to compel all the capital's public medical organizations to take out medical malpractice insurance, official media reported.

Hospitals not covered for malpractice

China currently has scant protection against accidents in the health care system, leaving individuals to pursue claims that are usually unwelcome and seldom settled by any equitable standard.

According to a report by the Beijing Insurance Regulatory Committee released in June 2004, fewer than 20 city hospitals had taken out medical malpractice insurance.

"Without insurance, a lot of doctors are facing great psychological and economic pressure once a medical accident happens," Chen Wei, director of the doctor-patient relationship office of Jishuitan Hospital, was quoted by the Chinese-language Beijing News as saying.

And that is impacting medical practice, he said. "At present, a few doctors would rather use conservative measures in their treatment than to use new methods that may be more effective," he said.

Without insurance, a lot of doctors are facing great psychological and economic pressure once a medical accident happens.

In a bid to stir competition under terms of entry to the World Trade Organization (WTO), China has relaxed geographical and other restrictions on foreign insurers operating in its territory.

It also opened up to foreign participation health insurance, group insurance and annuities, which are related to pension provision.

More than 100 foreign insurers currently have representative offices in China. Of these, 32 have business licenses, 19 of which are life-insurance joint ventures and 13 of which apply to property and casual insurance.

Only around five percent of Chinese households have homeowner insurance, while motor vehicle coverage is just 30 percent.

Industry analysts at Swiss Reinsurance have forecast that China's overall insurance market will expand to more than U.S.$200 billion in the next 10 years.

In spite of the huge potential, the market is still poorly differentiated, with a lack of innovation and variety in product mix offered by China's 61 insurance providers.

While around 40 percent of China's U.S.$1.3 trillion savings pool is thought to be earmarked for pensions, education, medical care, and accident provision, only a small proportion of such provision is made in the form of insurance.

Only around 5 percent of Chinese households have homeowner insurance, while motor vehicle coverage is just 30 percent.

The list of foreign insurers waiting to begin or expand operations in China continues to lengthen.

Despite a flurry of litigation alleging lack of transparency after the listing of China Life's spinoff company in the United States last year, foreign investment interest in the sector remains strong.

Carlyle Group is set to invest U.S. $400 million in China Pacific Life Insurance for a 25 percent stake in the state-run company, recent reports have indicated.

A Different Scale of Risk