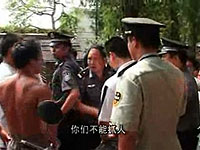 Villagers in Taishi, Guangdong province, confront the authorities in a landmark dispute in 2005. Photo: RFA

HONG KONG—Authorities near the southern Chinese city of Foshan have dispatched more than a thousand police and security personnel after local residents staged a protest at the use of their land by local government.

In a dawn raid on the village of Sanshangang in the Nanhai district of the city, police detained nine people, according to several dozen villagers who remained on watch while the others slept.

“They were all mobilized to deal with us...government officials, police officers, the head of the police department, He Haiqiao. There were about 2,000 of them,” local resident Cheng Huiying told RFA’s Mandarin service.

It’s very clear that the development that is going ahead is against the law. It is also against a directive on property development issued by the State Council.

Villagers had staged a sit-in and tried to stop construction work from going ahead, saying that the land had been taken over for development without their agreement and that they hadn’t received any compensation.

Police destroyed the tents in which the protesters were camping and ripped down banners hanging there, including a large portrait of Mao Zedong, witnesses said.

Cheng said there were some clashes as police moved to detain villagers, but that there were seven or eight officers for every detainee. “I heard that nine people were detained,” Cheng added.

One of those detained was Liang Huanpian. Her husband Luo Jilun told RFA reporter Ding Xiao: “There was no official notification, and we don’t know the reason for her detention. She was put in the police vehicle and taken away. I’m now frightened that they’re going to come back for me.”

The authorities’ response to the Sanshangang protest has been swift.

On Tuesday, civil rights activist Liang Weitang was taken away by police, and on Wednesday, four other villagers were ordered to pay more than 50,000 yuan to the property developers by a civil court in compensation for obstructing the development of the disputed land.

Guangxi-based civil rights legal advocate Yang Zaixin, who has been following events at Sanshangang closely, said the development work was illegal and that the civil case masked a network of crony capitalism behind the scenes.

“It’s very clear that the development that is going ahead is against the law. It is also against a directive on property development issued by the State Council,” Yang said.

“I would imagine that the central government must have taken some notice of this project, given that it’s worth several hundred million yuan and that it covers such a large area. I don’t think they can just let this one ride,” he said.

Villagers said their methods of protest were legitimate. “This is about justice. All the villagers signed the petition asking them not to start work,” a villager surnamed Guo said.

The protesters pointed to a recent directive from China’s cabinet, the State Council, which forbids any construction work on illegally obtained land designated for agricultural use.

And Guangdong provincial Party secretary Zhang Dezhang has warned that unless the issue of illegal land-grabbing is resolved, further repressive crackdowns would be seen in the Sanshan area.

China sees thousands of grass-roots protests every year, often at alleged wrongdoing by local officials in connection with lucrative land deals and property developments. Activists, petitioners, and the lawyers who help them are often detained, harassed, beaten up, or given jail terms.