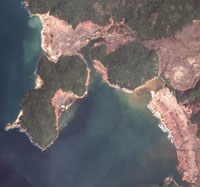 MEDAN, Indonesia—Thousands of ethnic Chinese refugees fleeing disaster-hit Aceh have evoked painful memories of old violence for the Chinese in Medan, where much of the relief effort is stalled awaiting transportation.

Several warehouses of grain and other aid intended for disaster-struck Aceh Province have been stuck across the provincial line in Medan City, as aid workers wait in line for flights to areas devastated by the tsanami.

Meanwhile, the city—which once had a Chinese mayor and remains home to a large Chinese community—has been scrambling to find food, shelter, and clothing for thousands of refugees from Aceh, RFA's Mandarin service correspondent Hu Hanqiang reported from the scene.

"As soon as you get off the plane you can see all the goods—warehouses stuffed full of supplies—waiting to be taken out to the disaster area," Hu said in a live interview.

"But it's not the usual scene you'd expect. There are people lying on the top of the goods, and they're also waiting for transportation into the affected area. Most communication routes into the area are closed," he said.

City officials are struggling to find transportation for vast amounts of grain amassed by local merchants, while at the same time dealing with refugees who have arrived in the city since disaster struck the shores of the Indian Ocean on Dec. 26.

The word here is that everything moves incredibly slowly.

"The government is busy liaising with international agencies to sort out the problem of moving the aid where it's needed," Medan mayor H. Abdillah told reporters. "We will ensure that the goods reach the disaster areas."

Around 4,000 of the refugees in Medan are ethnic Chinese from Aceh and have been billeted in a single district, known as Meida. Three other camps have been set up, one specifically to house Acehnese, who have a history of ethnic tension with the Jakarta regime and the Indonesians.

"Meida is in fact the place where a group of ethnic Chinese people were forcibly relocated from trouble spots in the rest of the country during the anti-Chinese violence of 1963," Hu said.

"So when the refugees arrived, the Chinese people already there were reminded very powerfully of the terrible times they lived through in those days, and moved by a great love for their compatriots in trouble."

"So this was the first place, and it was a spontaneous movement, to organize itself to help ethnic Chinese fleeing the disaster in Aceh."

Ethnic Chinese sources in Meida district told RFA that since they had mobilized themselves to take care of the incoming ethnic Chinese refugees, the government had paid them very little attention. 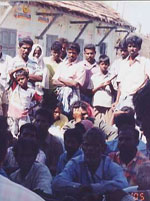 In fact, they said, it was far quicker to get things done by themselves than to wait for government assistance.

"The word here is that everything moves incredibly slowly," Hu said.

The official number of dead on Sumatra island including Aceh, just off the epicenter of the powerful deep-sea earthquake that triggered the tsunamis, has risen past 90,000, with nearly 400,000 people listed as displaced.

"In the past few days we have seen a lot of soldiers. There are military aircraft at the airport. There are also troops from Germany and Singapore. The hotels are full of soldiers here, not refugees."

As Medan's troubles evoked painful memories of anti-Chinese violence in Indonesia, the most recent wave of which occurred in 1998, the Chinese government was busy expanding its role as a provider of international aid to the tsunami-hit region.

"China is a country that is frequently stricken by natural disasters. We know how much pain they can bring and what genuine friendship means in times of tribulation," Chinese Premier Wen Jiabao, said in a speech to the ASEAN-led tsunami summit in Jakarta.

China can be rated as the region's most trustworthy and responsible friend in time of need.

Wen said Beijing's pledges of assistance—unlike those of the United States with its anti-terror agenda—would come with no strings attached.

"We feel that the immediate contribution coming out from China in wanting to assist the tsunami-affected region urgently can be rated as the region's most trustworthy and responsible friend in time of need," Wen told assembled world leaders.

China has pledged to have at least 50 percent of its U.S.$63 million aid promises in place by the end of the month. Wen also promised to send more medical personnel to the worst-hit areas, expand aid packages, and encourage Chinese companies to carry out reconstruction work by offering cheap and interest-free loans.

Beijing would work out debt programs with tsunami-hit countries, Wen said, adding that Beijing had already written off Sri Lanka's debt. But he added: "China is not rich."

China's contribution to the international aid package—for which the United Nations has appealed for U.S. $1 billion for immediate humanitarian assistance—is large by the standards of developing countries.

While some analysts are suspicious of growing Chinese influence in the region, others said Beijing was bound by its profession of a peaceful foreign policy to shine at times of humanitarian crisis.