Laos Concedes Land to China in Vientiane for Luxury Development 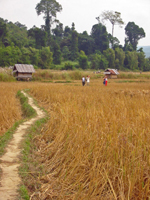 BANGKOK—Laos has agreed to a major land concession to Chinese investors to develop a Suzhou-style “model city” on the outskirts of the country’s capital, Vientiane, according to a well-placed source in Laos.

Under the terms of the agreement, China will hold the site—several hundred hectares around the That Luang Buddhist monument—on a 100-year lease, with permission to develop surrounding marshlands, a Lao government official told RFA’s Lao service.

The official, who declined to be named, was concerned that the Lao government had signed over the land in lieu of the repayment of hundreds of millions of U.S. dollars’ worth of interest-free loans.

“In this area, China has a program to build a new city like Suzhou—which is renowned for tourism, with its many bridges and variety of trees and vegetation,” the official said. “In addition, they will build a development of luxurious homes for wealthy Chinese, and in addition, thousands of Chinese families will move in and live on this land.”

The official said he was unsure why the government would allow potentially large numbers of Chinese nationals to come and live in the area, to the northeast of the Lao capital.

He said he feared the establishment of a large “Chinese city” close to That Luang, which is a potent monument to Lao nationalism.

China’s presence in Laos has intensified rapidly since it organized a financial bailout of the impoverished country in the wake of the Asian financial crisis.

Since 2000, Beijing has poured money into Lao infrastructure, including a “land bridge” through which Chinese goods can flow into Thailand.

In this area, China has a program to build a new city like Suzhou.

Pha That Luang, which means “Great Stupa” in Lao, was built in the 16th century under King Setthathirat on the ruins of an earlier 13th century Khmer temple. This was built, according to tradition, on the remains of a third century Indian temple built by Buddhist missionaries.

Relics of the Buddha are said to be kept in the stupa, whose architecture includes many references to Lao culture and identity, and has become a symbol of Lao nationalism.

China has also expressed a strong desire to increase imports of natural resources from Laos, including timber, iron ore, copper, gold, and gemstones.

In 1997, China helped bail out the Lao economy by increasing aid, trade, and investment through a series of bilateral agreements covering economic and technical cooperation, investment and banking, and infrastructure development.

Beijing also provided generous export subsidies and interest-free loans which enabled Laos to stabilize the value of its currency during a crisis in 1998-99 to the tune of U.S. $1.7 billion, according to official Chinese media. The new relationship was cemented with the visit by then President Jiang Zemin to Laos in November 2000, the first by a Chinese head of state, and Beijing agreed to cancel much of the Lao debt in 2003.

Two-way trade grew from U.S. $33.1 million in 1990 to U.S. $118.3 million in 2003, much of it in China’s favor, according to figures compiled by the Asian Development Bank (ADB). China is officially Laos’s third biggest trading partner, although far more trade is known to occur unofficially across their common border than is ever recorded by officials.

In 2004, the government-controlled Vientiane Times said the cumulative total of Chinese investment in Laos since 1988 had reached U.S. $342 million, making China one of the top three foreign investors. Experts say China and Vietnam are strategic competitors for influence in Laos.