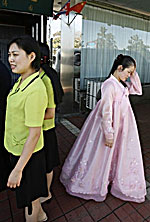 SEOUL—Human traffickers in China who hope to sell women fleeing North Korea have been known to push addictive drugs on their victims to make them submissive, defectors and experts say.

“Brokers force North Korean women defectors to take illegal drugs,” said a North Korean woman who defected to China in search of a better life, only to be passed from human smugglers to bride traffickers. “All of them end up shooting up drugs,” the woman, identified only by her surname, Lee, told RFA’s Korean service.

“The same happened to me. The reason why the brokers do that is that they are afraid that we might get scared and resist, and that is why they give us drugs, to break our will,” she said.

“Before I was sold as a bride to a Chinese man in that poor village, the brokers kept pushing the drugs on me, and later on I had a very hard time recovering from my addiction,” said Ms. Lee, speaking in the northeastern Chinese city of Dandong, which borders North Korea.

Before I was sold as a bride to a Chinese man in that poor village, the brokers kept pushing the drugs on me, and later on I had a very hard time recovering from my addiction.

“For a long time, because of my previous drug addiction, I got the shakes, and I felt nauseated and confused every morning. I can still feel the side effects of that addiction,” said Lee, who is in her mid-30s and now works as a waitress in downtown Dandong.

According to a series of defector interviewed by RFA, North Korean women defecting to China need the assistance of “brokers,” who often inflict tremendous suffering upon them, exposing them to illegal drugs and handing them over to human-trafficking rings.

Lee said the cost of her defection from the southern part of North Korea to China, through Hweryong in North Korea’s Hamkyong province, was about U.S.$600.

“Money is absolutely necessary if one is considering defection. Every move along the path of defection requires money,” Lee added.

“I was deceived by brokers in Hweryong and sold as a bride, just like a commodity, plain and simple. I still find it hard to comprehend how I ended up in that Chinese village. It was a village more destitute than even the poorest of North Korean rural areas. Later on, I managed to escape.”

Thousands of North Korean women are believed to have been sold as “brides” to Chinese men, who often put them to backbreaking labor and subject them to constant fear, physical assault, and sexual abuse.

However, Lee’s allegations were the first in an RFA interview to mention the forcible use of drugs.

Most women trafficked in China come from areas of North Korea close to the Chinese border, such as Chagang, Northern Hamgyong, and Yanggang provinces. Often they were already extremely poor and socially marginalized—itinerant peddlers or street children.

The traffickers, mostly ethnic Korean Chinese citizens, operate a well-honed system to bring the women to China, consisting of scouts, distributors, brokers, and transporters. The scouts identify vulnerable women and lure them into crossing the Chinese border with promises of a well-paid job.

“Once they arrive in South Korea, as North Korean defectors, they are once again subjected to rather tight surveillance,” he said.

Trafficking on the rise

“That is why they are afraid to talk about the drugs being pushed on them by the brokers and their previous drug addiction, and that is why we know so little about this inhumane ordeal experienced by North Korean women trafficked in China.”

“North Korean defectors in China have been subjected to appalling human rights violations and abuses. This situation has been developing within the Chinese territory, and first and foremost, the Chinese government needs to be actively involved in curbing these abuses,” he said.

“Also, the North Korean government cannot escape responsibility for having created an environment that leaves many North Koreans no choice but to flee their own country. That is the main reason why North Korean women fall victim to illegal drugs and human traffickers,” Ryu said.

“If living conditions in North Korea do not improve, the flow of defectors into China will continue, and these terrible abuses will have no end. This situation has the potential to turn into a human rights crisis of international proportions,” he said.

Original reporting in Korean by S.W. Park. Translated, with additional reporting, by Grigore Scarlatoiu. Written for the Web in English by Luisetta Mudie and edited by Sarah Jackson-Han.