Thailand’s Novel Approach to Drugs Could Offer Lesson to Neighbors 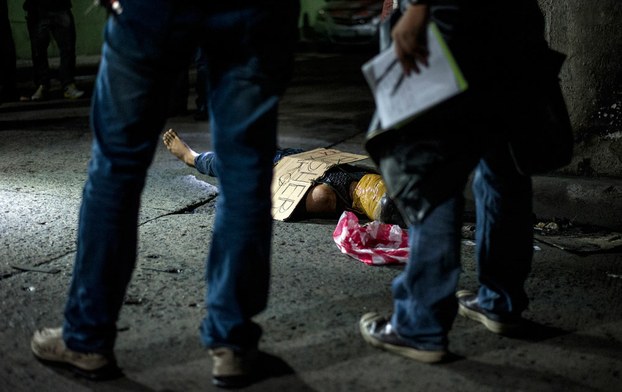 Police officers investigate the body of an alleged drug dealer, his face covered with packing tape and a placard reading "I'm a pusher," on a street in Manila, the Philippines, July 8, 2016.

Forward thinking is not what one has come to expect from the conservative military regime running Thailand for the past two years. But a government which otherwise likes to suppresses dissent and emphasize the need for law and order, has proposed what for southeast Asia is a novel answer to what is seen as a major problem: drugs. It also provides a welcome contrast to the extra-judicial slaughter of alleged drug dealers unleashed in the Philippines by newly-elected President Rodrigo Duterte.

Thai Justice Minister Paiboon Kumchaya announced last month that his ministry was consulting with relevant agencies a proposal to exclude Ya Ba from the list of illegal narcotics. Ya Ba is the colloquial term for the pills which are by far the most widely used illegal drug in the kingdom. They are methamphetamine usually mixed with caffeine and occasionally other substances. They are the Thai equivalent of the Philippines’ most ubiquitous illegal narcotic colloquially known as Shabu, a methamphetamine in pill, crystal or powder form which can be ingested, inhaled or injected. So far some 400 alleged shabu sellers and users have been gunned down by anonymous assailants since Duterte took office at the end of June – and the toll mounts daily.

Myanmar, Laos and even isolated North Korea are all grappling with problems associated with production, use or smuggling of methamphetamines.

Thailand however appears to have learned a lesson – also brutally. Paiboon noted that decades of waging war against narcotics had been a failure. Usage had actually increased. In the case of Ya Ba, ending its illegal status would encourage addicts to come forward for treatment. He claimed medical evidence showed Ya Ba to be less harmful than alcohol and tobacco – both readily available, socially accepted substances. (Western doctors in Hongkong once made the same point about opium being less of a public health hazard  than alcohol).

Thailand learned from former prime minister Thaksin Shinawatra’s effort in 2003 to wipe out drugs via extra-judicial killing of those allegedly engaged in their promotion and sale. More than 2,000 people are believed to have perished in this brutal exercise. Though Ya Ba prices soared and thousands of users volunteered for treatment, the impact was short lived. Those killed were almost all small time vendors. No big fish were caught and cross-border trade in narcotics was barely interrupted. Some users turned from Ya Ba to other substances. Before very long, drug use was back to where it had been before the blood-letting.

The death penalty is used, though not extra-judicially, against drug vendors in other southeast Asian countries including Indonesia, Malaysia and Singapore. In the case of Indonesia it has been revived by President Widodo, drawing much foreign criticism, if mainly because several of the victims have been foreigners. Indonesia and Malaysia have also made efforts to increase treatment of addicts with compulsory treatment. They also enable the supply of needles to those using intravenous drugs in an effort to reduce the spread of HIV via needle-sharing.

However there may well be a danger that the whole drug issue is being exaggerated, that the efforts should be focused on rehabilitating confirmed addicts, especially of heroin. rather than a vain attempt to wipe out usage.

For instance, Widodo quoted a figure of 4.5 million users which amounts to almost 3% of the adult population. However, of those only 1 million are classed as addicts and addicts include anyone using drugs more than 49 times a year. Once a week is a broad definition of addict. The other 3.5 million so called users include 1.6 million who have once used a drug.

Nor is it clear whether the drug situation has deteriorated significantly. Shabu has been widely available in the Philippines for at least two decades and any increase may simply be a reflection of the rise in the urban population with ready access to it. There is nothing new about young people getting “high” at parties whether using alcohol or illegal substances. Indeed the parents now cheering Duterte’s cynical onslaught may well have been occasional users too in their youth. The death toll to date suggests that it is the poor whether vendors or users who are mainly being killed, not the better off.

Keeping drugs out of archipelagic countries with vast coastlines would be almost impossible even if the police and other law enforcers were all clean – which they are not.

Nor do most laws draw much if any distinction   between types of drugs – such as between opium and marijuana and heroin. Illegality also results in varying levels of strength and composition in shabu and Ya Ba. These variations are seen as responsible for many drug-related deaths. The illegality of shabu and similar substances also leads to much petty theft by users to support the habit.

As it is, in much of Southeast Asia, anti-drug campaigns have filled the prisons – half of the prison population in Malaysia for example – without suppressing either demand or supply. Prisons are no place for rehabilitation, particularly as drugs often circulate there too. Meanwhile the people who make the big money from the trade, those who control the cross border shipments and the factories making pills and powders, are rarely ever caught. Even less often are their profits not successfully laundered via legal trade or through casinos.

In open societies, the selective drug war cannot be won. Sensible policies focus on mitigating the drug impact on health and on other crimes.  President Duterte needs not only to abide by the nation’s laws, but to learn some lessons from Thaksin and Thailand of what not to do. He could start by inviting Paiboon to advise its ASEAN neighbor.

Philip Bowring, former editor of the Far Eastern Economic Review, is a freelance columnist based in Hong Kong. He is a consultant editor to the Asian Sentinel.