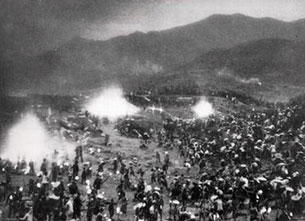 Chinese farmers attempt to make steel by melting down pots and pans at the start of the Great Leap Forward in 1958.
Photo courtesy of Wikipedia.
Why should anyone care about a famine in China that occurred more than half a century ago?

And what relevance could it have for a China that has changed so dramatically in recent decades?

First, the issue is still a sensitive one in China, where the Communist Party’s legitimacy depends partly on portraying Mao as a great leader.

The official line: Mao made some mistakes but mostly benefited the country. Until recent years, many of the internal documents countering this conclusion were not publicly available.

Second, this famine was no small, localized event. Recently discovered documents reveal that the death toll was much higher than originally thought.

Chairman Mao Zedong’s Great Leap Forward of 1958-60, which was aimed at collectivizing China’s farms and boosting production, ended up instead producing the biggest famine in world history.

Third, the party’s censors have effectively obliterated the memory among many Chinese of this dark period and Mao’s role in it.

Even in the Internet age, when news in China sometimes moves at lightning speed through microblogs, China’s younger generation and even some urban, educated middle-aged Chinese appear to know little of the famine or the other disasters created by Mao.

Chinese textbooks have dismissed the famine as “three years of natural disasters.”

Now the record has been set straight in a comprehensive way by a conference of famine survivors and both Chinese and foreign experts.

The conference organized Feb. 15-16 by the Laogai Research Foundation’s executive director and former political prisoner Harry Wu has helped to eliminate any doubts that the famine was man-made or that Mao was chiefly responsible for it.

The conference opened at the Heritage Foundation in Washington D.C. 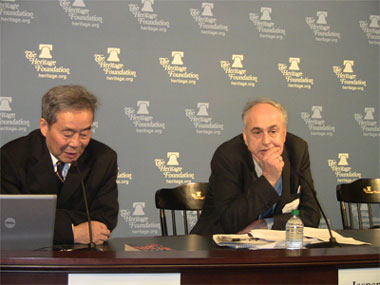 As Dutch historian Frank Dikotter said at the conference, the most sensitive information about Mao’s great famine still remains locked up inside China.

But Dikotter was nevertheless able to examine more than a thousand documents from all over China.

His conclusion: Mao Zedong knew what was happening in the countryside. He knew about the famine deaths. He knew that local officials had frequently launched violent attacks on farmers who resisted collectivization or failed to meet grain production quotas.

And Mao pushed to extract more grain from the farmers. He then ordered exports of large amounts of it, “all the while denying the masses the food they themselves had produced,” according to former Xinhua News Agency reporter and conference speaker Yang Jisheng, who has the documents to back this up.

I  should acknowledge a personal interest in this because I wrote a two-part series of investigative reports for The Washington Post in 1994 that showed that the number of people who died in more than a dozen repressive, often violent, Mao-made political campaigns between 1950 and 1976  was millions higher than previously thought.

Mao Zedong’s deadly toll has clearly surpassed those of Adolf Hitler and Joseph Stalin—the two people most associated with mass deaths in the 20th century.

In his 1996 book Hungry Ghosts, Jasper Becker, a veteran China correspondent from the United Kingdom, has documented the failure of many Western experts and prominent foreigners to recognize at the time the enormity of what happened in China during the famine years.

China’s greatest human disaster ever came in the famine of 1958-62. But for decades afterward many Western scholars studying China denied or could not believe that a famine had occurred.

Many tended to believe that Mao’s policies were well meaning but badly implemented at the local level, or simply that they had unintended consequences.  Chinese government guided tours also misled some foreigners.

Then more information began to seep out. In the 1990s, Judith Bannister, a demographer at the U.S. Census Bureau, put the famine death toll at about 30 million.

An even higher figure—43 million—came from Chen Yizi, a former Chinese official who spent years researching the subject. Becker and I took that figure seriously.

Yet for years, many Western and Chinese academics continued to avoid the subject or even to deny that such a widespread famine could have occurred.

Inside China, there are no reminders—no museum or monument to honor the tens of millions of victims.

But this was far from a result of natural disasters.

According to Becker, figures from the Chinese Central Meteorological Center show that China had fewer floods and droughts in 1960 and 1961 than in many preceding years.

And a new volume of official Chinese Communist Party history published last year that covers the period 1949-1978 claims that Mao realized that there were problems with the Great Leap Forward and that Mao “worked hard to correct them.”

Frank Dikotter says that this is simply not true.

He concludes that 45 million people “died unnecessarily” between 1958 and 1962. He has based his findings on official documents collected from dozens of party, government, and public security archives from all over China.

More than a famine

He also makes the point that the word “famine” may obscure the scope of the violence involved  in the collectivization drive that led to the famine.

“The blithe use of the term ‘famine’ … tends to support the widespread view that these deaths  were the unintended consequence of half-baked and poorly executed economic programmes,” Dikotter said.

“Mass killings are not usually associated with Mao and the Great Leap Forward, and China continues to benefit from a more favorable comparison with the devastation associated with Cambodia and the Soviet Union.”

“But as fresh archival evidence demonstrates, coercion, terror and systematic violence were the foundation of the Great Leap Forward … people died prematurely of many man-made causes, from torture and summary execution to deliberate starvation.”

Many of the conference participants were Chinese. Some of them, survivors of the famine, were speaking up in public for the first time.

More even than archival documents, their wrenching personal stories will perhaps convey the truth at last.