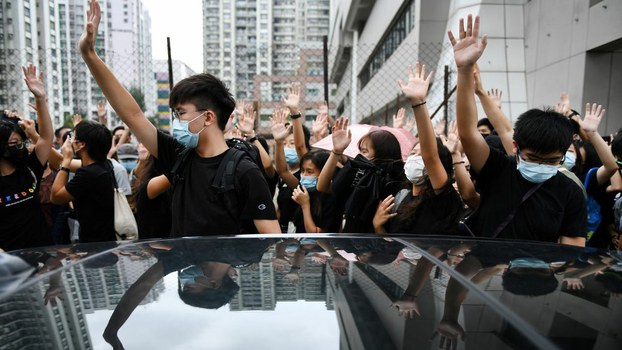 Protesters shout slogans as they gather outside the Eastern District Courts in Hong Kong, where the first protesters arrested for wearing face masks appeared in court, Oct. 7, 2019.

So far, few commentators or analysts appear to fear any crackdown in Hong Kong will be as harsh as the one that occurred against student-led protesters in Beijing’s Tiananmen Square in early June of 1989.

But once a final crackdown occurs—either piecemeal or suddenly—one thing may resemble the aftermath of Tiananmen: a radical reform by the authorities of Hong Kong’s educational system.

Having ordered the crackdown at Tiananmen Square in the spring of 1989, one of the first actions taken by China’s then supreme leader Deng Xiaoping was the introduction of “patriotic education.”

On Oct. 31, Shen Chunyao, director of the Hong Kong and Macau Affairs Office, said Hong Kong officials and teenagers should learn about the constitution, as part of an educational program aimed at "strengthening the national consciousness and patriotism of Hong Kong and Macau compatriots through the education of history and Chinese culture."

As a former reporter who covered the Tiananmen massacre, I stayed on for another year to witness a crackdown by the Communist authorities that included the campaign to instill “correct thinking” throughout schools and universities.

I was based in Hong Kong for three years in the 1970s as the Asia bureau chief for The Christian Science Monitor. At first I grew to believe that most people in Hong Kong cared about only one thing—making money. But subsequent events taught me never to underestimate Hong Kong. And I became friends with a few Hong Kong journalists whom I greatly respect.

My daughter was born in Hong Kong in 1988, and through that experience I learned to respect excellent physicians working there. My son also had positive experiences in Hong Kong. He loved the old Star Ferry in Hong Kong, among other things.

I’m no expert on Hong Kong’s education system. I’ve heard both pros and cons. But a look at mainland Chinese media indicates that the authorities plan at some point to shake up the education system.

The official English-language publication China Daily published a commentary on September 25 titled “Education flaws linked to Hong Kong unrest.” It labeled Hong Kong students engaging in protests as “radicals.” The commentary ignored peaceful protests led by the students while emphasizing outbreaks of violence on their part.

This won’t be the first time that China has attempted to transform Hong Kong’s education system. Seven years ago, in the summer of 2012, tens of thousands of demonstrators marched in Hong Kong to protest against a plan to introduce a “moral and national education” course that was backed by Beijing.

As a Time magazine article published in early September 2012 explained, the course was pitched as a way to teach China’s history and to “instill national pride.”

But, Time says, it met with “staunch resistance” from students, parents, and teachers who considered it a form of brainwashing.

It should be noted that while university students have played a key role in organizing the current protests in Hong Kong, they are far from being united as one bloc. Their ranks include moderates, while some are more radical in their goals.

They’ve enjoyed widespread public support and have benefited from a view held by many both in China and Hong Kong that young intellectuals are truth tellers who embrace the highest ideals.

But the students lost some of their supporters when some of them vandalized Hong Kong stores and briefly shut down the Hong Kong airport.

When thousands of students stormed and vandalized Hong Kong’s legislative building, known as LegCo, it was viewed by some as going too far. LegCo is Hong Kong’s main government office building.

The protests in Hong Kong were triggered by a proposal introduced in April by Carrie Lam, Hong Kong’s chief executive, that would have allowed criminal suspects and Hong Kong citizens to be extradited to mainland China. Opponents of the blll said that it might be used to silence China’s critics or to send dissidents to China, where they would face a Communist Party-controlled legal system and unfair trials.

This was not the way that things were meant to evolve when Britain on July 1, 1997 transferred sovereignty in its erstwhile colony  back to China under a ‘one-country, two systems” arrangement that was meant to preserve Hong Kong’s traditional freedoms for the next half century.

According to The New York Times, surveys showed at the time that that a majority of Hong Kong citizens were happy about the handover. And Hong Kong became “a refuge for Chinese dissidents and those fleeing upheaval in China.”

But since then Hong Kong has become a much more expensive city to live in, and the protests have been driven in part by anger over Hong Kong’s wealth gap and high housing costs.

The extradition bill was withdrawn in June, but by that time the students’ demands had expanded well beyond the bill to include nearly half a dozen other demands. These have included an end to prosecution, amnesty for all of those detained by the police, an inquiry into police brutality, free elections under universal suffrage, and a halt to any description of the protesters as “rioters.”

In 2014, a prodemocracy movement dubbed the Umbrella Movement emerged in Hong Kong to protest a decision made in Beijing to require a selective pre-screening of candidates for a 2017 election of city’s chief executive. The protesters wanted a more transparent process.

The movement got its name from the use of umbrellas by the demonstrators to guard against the police’s use of pepper spray to disperse them. A 79-day-long occupation of central parts of Hong Kong ended once the protests simply died down. Fatigue had set in.

But my instinct tells me that unlike the demonstrations in 2014, the city’s current protests against tightening Chinese rule won’t end easily and could turn into a years-long protracted struggle.

Some Hong Kong students are beginning to ask whether the city is destined to become another Northern Ireland, where what came to be known as “The Troubles” lasted for 30 years, from 1968 to 1998.

In Hong Kong, the situation has been made more dangerous for protesters because of several attacks by pro-Beijing thugs. In one incident, unidentified men wielding hammers attacked and seriously injured Jimmy Sham, a prominent figure in the pro-democracy movement.

Meanwhile, apparently because of stress, an undetermined number of students in Hong Kong have committed suicide.

But many idealistic young people who are still clearly willing to risk physical injury—and many of them have now been wounded in police attacks—don’t appear ready to retreat.

Nor does China appear ready to back down in dealing with Hong Kong’s restive citizens.

In a succinct analysis, Jamil Anderlini of the Financial Times explains that the authorities in Beijing now feel that they were “far too soft” in dealing with the mass protests that erupted in Hong Kong in 2014.

But since neither side can now back down, Anderlini says that “the chances of People’s Liberation Army soldiers on the streets of Hong Kong are rising every day as the violence escalates.”

“The central government will try to retain the trappings of an international financial center— open markets, a freely convertible currency, a relatively independent and professional judiciary  for non-political cases—but will quickly strip away the rights and freedoms that make Hong Kong unique.”

Meanwhile, China has been preparing for what might become a protracted struggle by touting an alternative location near Hong Kong for investors, bankers, and business people to transfer their operations if the situation deteriorates.

That alternative location is Shenzhen, a boomtown in China’s province of Guangdong, which borders Hong Kong.

But Jingzhou Tao, China managing partner of the international law firm Dechert, argues in a commentary published by the Financial Times on Oct. 28 that “Hong Kong is irreplaceable as the region’s financial center.”

“The question increasingly being asked is whether Hong Kong can remain a “fragrant harbor [as its Chinese name translates into English] for major banks and multinationals, or whether it will be abandoned,” says Tao.

“Such concerns have pushed the Chinese government to prepare a Plan B,” Tao says.

The government has decided to promote Shenzhen’s role in the development of the Hong Kong-Macau-Guangdong Delta, thus making Shenzhen the main financial hub in the region.

Macau, a former Portuguese colony returned to Chinese sovereignty in 1999, has been chosen to launch China’s first offshore treasury bonds and to develop Macau into a Chinese Nasdaq.

But according to Tao, these plans will face “a formidable hurdle.”

Since the handover of sovereignty from the UK to China in 1997, he says, “Hong Kong still ranks first in the world on the Heritage Foundation’s 2019 Index of Economic Freedom. It still enjoys a well-developed financial system…and has also benefited from very light regulation.

“These features contrast with mainland China, where financial systems are less developed, the government (both centrally and locally) is heavy-handed and regulations are in a process of constant transformation.”

Meanwhile, according to official data released on October 31, Hong Kong’s economy has now entered its first recession since 2009 as a result of the months of protests as well as the impact of the U.S.-China trade war.

But Tao concludes that in the end “what really sets Hong Kong apart from mainland hubs, such as Shanghai and Shenzhen, are its rule of law and the independence of its judiciary.”