The struggle to control prices has led to finger-pointing at the United States, economists say.
By Michael Lelyveld
2010-11-29
Tweet 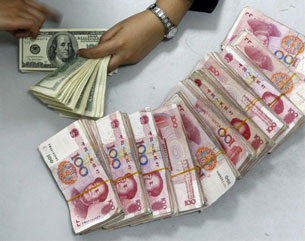 China is waging a battle against rising inflation, while putting part of the blame on the United States, economists say.

The government has ordered a long list of measures to cope with the price problem following signs that inflation will easily top the official target of 3 percent this year.

The rate hit a two-year high of 4.4 percent in October, driven by a 10.1-percent jump in food prices.

Complaints have been growing as the problem accelerates, according to state media. Cabbage prices in Beijing and Shanghai tripled in the past month, the official English-language China Daily said.

The government has responded by vowing to boost production, trim the money supply, and pay subsidies to the poor. Last week, local reports claimed some success in bringing prices of vegetables down.

But there have also been hints that the government would like to shift some responsibility for the problem to forces beyond its control.

Gao argued that the U.S. Federal Reserve's plan for a second round of economic stimulus, known as quantitative easing, has "pumped excessive money into the global market," raising commodity prices.

But Harvard University economics professor Dale Jorgenson rejects a link to the Federal Reserve's U.S. $600-billion bond buying plan, which was only announced on Nov. 3.

"It's too early to talk about the effects of quantitative easing. This is something that's just starting," Jorgenson said.

"China's inflation problem is something that's been visible now for the past year or so, and that's long before the quantitative easing was decided on by the Federal Reserve."

China's problem is a delayed response to its own 4- trillion-yuan ($586-billion) stimulus program, launched in November 2008, said Jorgenson.

"That has resulted in a huge increase in the amount of finance available in China and, as we'd expect, that has led to inflation," said Jorgenson.

Food prices have joined in the run-up with rising demand following double-digit pay hikes for many workers this year.
China's consumer price index (CPI) is particularly sensitive to food costs, which make up one-third of the data's basket of goods.

The government is fighting the inflation with a belated flurry of measures after the National Bureau of Statistics (NBS) said in early November that the 3-percent target would be difficult but still "achievable."

Local authorities have been ordered to increase planting and cut power prices for fertilizer manufacturers, while road tolls have been suspended for produce trucks starting Dec. 1.

But some anti-inflation measures appear to contradict earlier government programs.

Limits to be lifted

Some local authorities had curbed coal transport to encourage industry mergers under the government's campaign to improve safety by closing smaller mines.

China's government goes on alert whenever it risks missing a national target, said Gary Hufbauer, senior fellow at the Peterson Institute for International Economics in Washington. But inflation is a particularly troubling concern.

In China's history, high inflation of 15 to 20 percent has been a trigger for social instability, said Hufbauer.

"Their leadership is rightly concerned about that, but I would say the actions that the leadership is taking are not equivalent to the problems they face," he said.

Hufbauer suspects there are many Chinese economists who know that the measures are inadequate.

One way to deal with the problem would be to allow a substantial appreciation of the Chinese currency. Washington has been pressing China for years to let the yuan rise against the dollar instead of keeping it artificially low to boost exports.

"That would do a lot to dampen the inflation. But we know the pressures in China are not to deal with it that way, so they're seeking all sorts of other smaller tools to try to slow it down," said Hufbauer.

But Dale Jorgenson said the yuan is appreciating in real effective terms against the dollar anyway, since inflation runs so much higher in China than in the United States, where the CPI is only about 1 percent.

Jorgenson argued that Washington has been too focused on shifting the currency's value in nominal terms. "It's the real exchange rate that matters," he said.

While the real effective rise of the yuan would cheapen China's imports and help bring its inflation down, Hufbauer questions how much effect this will have on easily traded goods.

But the economists agree that the Federal Reserve action on quantitative easing is not a cause of China's problem.

"That may be convenient to blame. We always like to blame problems on foreigners. Every country likes to do that, but this really has nothing to do with the Chinese inflation," Hufbauer said.