China is citing Europe's debt crisis as a new concern for its currency policy, but U.S. patience over trade deficits may be wearing thin.
By Michael Lelyveld
2010-05-24
Tweet 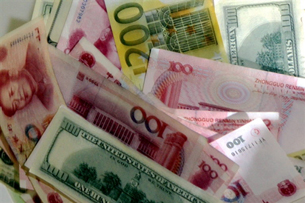 BOSTON—Europe's debt crisis may be the latest trouble for China's controversial currency policy, but experts say it should be no reason to stall needed reforms.

Chinese officials are said to be delaying a long-awaited increase in the value of the yuan because of concern about new economic pressures in its largest export market.

While the euro plunged to a four-year low against the dollar on May 17, it has also dropped by some 14 percent against the yuan this year, making Chinese products more costly to buy.

Analysts say that despite growing pressures for appreciation of its undervalued currency, China may be getting cold feet as it worries about the price effect in Europe and the prospect of lower demand for its goods.

"I think they were getting to a decision to revalue, and then this came along and created uncertainty," said Harvard University economics professor Dwight Perkins. "It hit home to them that the euro isn't all that stable."

The yuan's value and its effect on U.S. trade are key issues for a session of the U.S.-China Strategic and Economic Dialogue (SED) in Beijing this week. But U.S. officials have said they will not press hard on the policy until China weighs the effect of the euro's drop.

On May 13, Premier Wen Jiabao warned that complications of the world financial crisis and the sovereign debt problem "should not be underestimated," the official Xinhua news agency reported.

The speech to the China-Arab Cooperation Forum in the northern coastal city of Tianjin contrasted with China's economic performance, which has so far seemed immune to the global slump.

But the worry is that the euro's slide could be a dangerous trap for China's trade. Since China has kept the yuan tightly pegged at about 6.8 to the dollar since 2008, it has strengthened against the euro as Europe's currency declines.

By letting the yuan rise against the dollar now, China may only widen its gap with the euro, putting more pressure on exports.

U.S. manufacturers and critics have complained for years that China deliberately undervalues the yuan by up to 40 percent to make its products cheaper abroad. The results have been rising tensions and tariffs, complaints about trade deficits and lost jobs.

On May 17, The New York Times reported that Chinese policymakers reached a "rough consensus" in early April to ease its controls on the yuan. But nervousness over the euro and Greece's debt have given advisers new reasons for doubt.

"The Greek crisis fully exposed the weakness of the global economic recovery," said Yu Yongding, a former member of the People's Bank of China (PBOC) monetary policy committee, according to the English-language China Daily. "It is hard to predict what will happen next."

Officials have grown concerned about declines in China's monthly trade surpluses, although they initially dismissed the trend as temporary.

On May 17, Ministry of Commerce spokesman Yao Jian said this year's global surplus is now expected to drop "steeply" from $196 billion in 2009, citing a "negative impact on China's exports to Europe."

"China will decide on the policies toward the yuan based on its own needs and assessment of the domestic and global economies," Yao said.

On May 22, Minister of Commerce Chen Deming said China would "continue with the direction of the reform of our currency," but he gave no hint of when it would loosen its controls.

Opening the SED meeting on Monday, President Hu Jintao used similar words, saying that "China will continue to steadily advance the reform ... under the principle of independent decision-making, controllability, and gradual progress."

Perkins said China appears to be waiting for the perfect time to alter its monetary policy, but perfection will be hard to achieve for a change that has been long overdue.

"No time is really great," he said. "I don't think the fluctuation in the euro is a good reason (to delay). They should be moving toward revaluation."

One major problem with delay is that "hot money" has been pouring into China, anticipating a higher value for the yuan. More cash in Chinese banks has raised pressure to make loans, helping to boost the property boom that the government has been struggling to control.

On May 15, the State Administration of Foreign Exchange (SAFE) reported that China's capital and financial account surplus hit $55 billion in the first quarter, but an official denied that currency speculation was the cause.

"Pressure from capital inflows is increasing," said the unidentified SAFE official, according to China Daily. "But we can't say large capital inflows are definitely hot money."

Economists say the monetary policy is also behind the global imbalance that has pushed China's foreign currency reserves above $2.4 trillion.

Although the euro's woes may have some effect on China's economy, experts doubt that its trading partners will see further delay as justified.

Patricia Mears, director of international commercial affairs at the National Association of Manufacturers in Washington, said there will always be new reasons to put off currency reforms.

"They are never going to find a perfect time. There are always going to be conditions that could be of concern to them," said Mears. "But the reality is the longer they put this off, the more protectionism grows around the world."

"Basically, the Chinese have got to end this policy," she said.

In March, 130 members of the U.S. House from both parties urged the Obama administration to slap duties on Chinese goods because of its currency policy. Fourteen senators also sponsored bipartisan legislation that could impose tariffs if China fails to act on the yuan.

Mears said lawmakers are unlikely to be swayed by the euro argument after the United States recorded a $51.7-billion trade deficit with China in the first quarter of the year.

"I think it's highly unlikely that they're going to give China a pass," said Mears.

Congress is likely to hold fire until it sees the results of the two-day SED meeting in Beijing and the Group of 20 (G20) summit in Toronto in late June. After that, U.S. patience may wear thin.

"If nothing's happened post-G20, I think there are going to be big problems," Mears said.