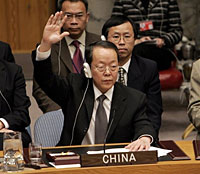 October 14, 2006: Wang Guangya, China's Ambassador to the United Nations, joins the Security Council as they vote unanimously for a resolution applying sanctions on North Korea for their nuclear program. Photo: AFP/Stan Honda

North Korea’s nuclear test has sparked a debate inside China about whether it should have taken a stronger stand against Pyongyang’s weapons program, analysts say. And experts say China may soon face a similar decision regarding Iran.

China’s U.N. ambassador Wang Guangya repeated his country’s condemnation the next day, saying that North Korea should face “punitive actions” because of the test.

Plans for a forceful U.N. Security Council resolution dimmed as China balked at tough measures. Several steps agreed by the Security Council, such as a total ban on North Korean ships in foreign ports and required inspections or interdictions of cargoes, have been weakened as a result.

Adam Segal, senior fellow for China studies at the New York-based Council on Foreign Relations, cited “a big debate in China now going on about if the Chinese should have done more” to prevent North Korea’s test in the first place.

“I think there was certainly on the [part of] most Chinese diplomats a kind of willingness to underplay what the North Koreans’ capabilities were. Often the Chinese would say, ‘We’re not really sure they have a bomb, and they’re just trying to get the U.S. back to the [negotiating] table.”

The question is complicated by China’s concern over a possible influx of refugees from North Korea in the event of a collapse of that country’s regime, Segal said.

It turns out that North Korea … did not really respect Beijing’s opinion, and did not care about China’s vital interests.

Jing Huang, a senior fellow in foreign policy studies at the Brookings Institution in Washington, agreed that some of China’s leaders “want to take stability and peace as the first priority.”

Others “want to be more aggressive and promote a nuclear-free Korean Peninsula,” Huang said.

North Korea’s weapons test may now serve as a wake-up call to Chinese leaders, said Huang, adding, “It turns out that North Korea … did not really respect Beijing’s opinion, and did not care about China’s vital interests.”

How far China may now go in carrying out cargo inspections and tightening border control is unclear.

More at stake than oil

Also uncertain is whether China will support possible future U.N. sanctions against the nuclear-weapons ambitions of Iran, China’s third-largest supplier of oil. But Huang argued that China has more at risk than its access to Iranian oil.

“China will lose more in the big picture because countries like Iran and North Korea are violators of the rules and the principles of international affairs,” he said. “What they’re doing will undermine the entire international stability and peace of which China is a part.”

William Reinsch, president of the Washington-based National Foreign Trade Council and a commissioner of the U.S.-China Economic and Security Review Commission, said China could exert pressure on North Korea if it wished by cutting off the flow of oil and other natural resources to the isolated country.

“They would tell you that they have less influence over the North Korean government than people think,” though, said Reinsch.

“You can believe that or not. That’s sort of self-serving on their part, but there may be an element of truth to it. [North Korea’s government] doesn’t appear to be a government that pays much attention to anybody.”

Original reporting by Michael Lelyveld. Edited for the Web by Richard Finney.