On The Mysterious Moves Behind The Constitutional Amendments 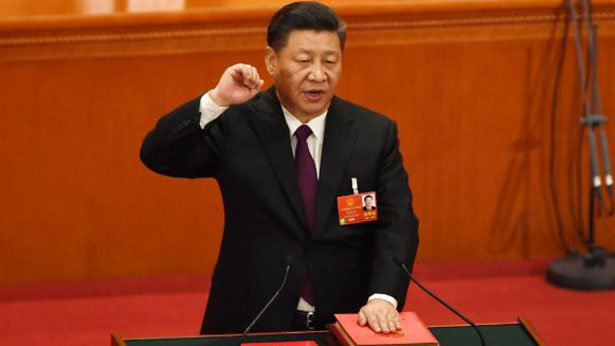 Chinese President Xi Jinping is sworn in for his second term at the Great Hall of the People in Beijing, March 17, 2018.
AFP

Does anyone really remember the year in which particular topics were discussed at the National People's Congress (NPC)? Maybe not, but the NPC sessions of 1982 and 2018 will definitely go down in history.

The constitution was first passed at the NPC session of 1982, legally limiting national leaders to two terms in office, up to a maximum of 10 years, not to be exceeded. Exceeding these limits was illegal.

In 2018, the NPC threw out these rules, freeing the president and vice president from these restraints. No extension of their time in office will now be regarded as unconstitutional.

Time limits on terms in office are no trivial matter. They speak to the fundamental nature of a state: whether it is a republic or an imperial dynasty.

China has the longest history of imperial monarchy and centralized power in Asia. It was also the first country in Asia to throw off the imperial system and begin the process of becoming a republic.

The fundamental differences between a republic and an imperial dynastic system are a little hard to fathom; some people don't know for sure what they are. But we can be sure about one difference. The term in office of the head of a republic is subject to limits that are determined by the masters of that state (its citizens), while there are no such curbs on an imperial monarchy.

It wasn't enough for the notorious Yuan Shikai to be president of the Republic of China; [in 1913], he had to go further and become emperor.

Wasn't that so he could avoid presidential term limits? Because of this, the issue of term limits has left a deep impression on the minds of the Chinese people, dating back to the 1911 revolution. It is the acid test for telling the difference between a monarchy and a republic.

The year 1949 has been called the year of liberation, as well as the year of revolution, but a lot of concepts have now mutated into something else. You can't have a revolution of half-measures, right? It's got to be for life. This is why the concept of term-limits became a suspicious one, tainted with counter-revolution.

And that's why that great revolutionary Mao Zedong insisted on remaining our liberator for life, wielding unchecked, lawless power that carried all before it, not to mention the clout to launch the Cultural Revolution, which smashed Chinese society to smithereens.

During his illustrious and lifelong leadership, he became more imperial than any emperor.

After 10 catastrophic years, we began to learn from our mistakes.

Naturally, people started to ponder questions like putting in place checks and balances for our leaders, and whether or not we could curb this process of deification.

This process of serious reflection opened up the imagination of the Chinese people. At an ideological retreat organized by the Communist Party leadership from late 1978 to early 1979, a young scholar called Yan Jiaqi, bravely, and on his own initiative, put forward the idea that leaders' terms in office should be limited, even in a socialist country under Communist Party rule; that lifelong tenure shouldn't be allowed.

This was a creative proposition. But, as I recall, just six months later, in September-October 1979, Yan came under suffocating political pressure. But after considerable efforts from all, Deng Xiaoping had the final word, pronouncing his support for an end to lifelong leadership.

In 1982, a post-revolutionary constitution was passed [at an NPC session] chaired by Peng Zhen, setting down in black and white two-term limits for the posts of president and the premier, not to be exceeded. (Please note, however, that no term-limit was attached to the chairmanship of the Central Military Commission, held by Deng Xiaoping at the time, nor has one been set since.)

In summary, the issue became an increasingly pressing one for Chinese people who knew about the 1911 revolution, and who had lived through the Cultural Revolution. This really was life and death for everyone, because it touched on matters of what our country was. Either the Chinese people were truly going to become masters in their own house, or they would end up as tools, slaves or cannon-fodder for any charismatic personality who wanted to make earth-shattering changes.

So we had to seek truth from facts. Deng Xiaoping was ambivalent about abolishing term-limits for leaders, supporting the idea as a means of curbing his political enemies, but opposing it when it came to his own unlimited power.

But Deng Xiaoping didn't need to amend the constitution to continue to hang onto effective leadership status and absolute power for life, while at the same time supporting an end to lifelong leadership in order to burnish his reputation.

He could play a double game, both appearance and reality, winning, but making himself look good at the same time. Deng's cleverness really was beyond the comprehension of some of the younger generation born since his death.

All of this forces me to reflect that now that we have abolished term-limits for president and vice president, we won't playing the double game any more. What you will see is what you will get. And exactly who will benefit?

Will it be the Communist Party? The government? The NPC? The president? The vice president? Somebody else? Who really needed the constitution to be amended? Who will gain massive rewards as a result?

I am pretty dumb, so no matter how much I rack my brains, I can't figure out who could be the real power behind these constitutional amendments, nor who will be their beneficiary.

And it looks as if the rest of China is even dumber than I am. The troops have been deployed; heaven and earth have been moved; the disapproval of the entire country has been faced down. The winner emerges before the eyes of a stupefied world. Checkmate.

Translated and edited by Luisetta Mudie.

Bao Tong, former political aide to the late ousted premier Zhao Ziyang, is under continual surveillance and frequent house arrest at his home in Beijing.

The issue of life long leadership tenure of China is a bit odd and a bit of a paradox.
Volunteering obedience to a master/ superior in perpetuity has been mentioned since the Code of Hammurabi.

The duty to comply with lawful directions is accepted by individuals in military, religious and legal matters subject moral commonsense.

I may be wrong but the American and French Revolutions, the 1848 revolutions and the English Civil War not to mention the Protestant Reformation sought quite ethically challenged absolute authority and check the power of, in general terms, an irremovable monarch/ leader.

My humble view is that the new Chinese irrevocable leadership is a metaphor irrevocable power held elsewhere.

Given most of Chinese business entities are owned by the people/state the new leader has not been appointed for his business acumen alone.