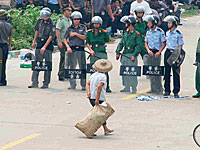 HONG KONG—Five people involved in land disputes with their local governments in China were detained this week in separate cases many thousands of miles apart.

Authorities in the southern port city of Shanwei have drafted large numbers of security forces to Dongzhou township and detained three local residents during police raids where tear gas was used. An eight-month-old baby was taken to hospital.

Lin Jingeng and Wei Chun were formally arrested for causing disturbances and damage to property. Wei’s husband You Zizhu was also detained, but it was unclear if he would also be charged.

The news travelled by car-horn. They were sounding all evening.

“She was detained. From 8 p.m. onwards there was a police patrol on the East Gate, keeping watch.”

“At 10 p.m., they detained Lin Jingeng who was at the home of Wei Shuihuan. At the time there was an eight-month-old baby who was badly affected by the teargas and was taken to hospital.”

According to RFA’s Cantonese service, around 20 police officers burst in to arrest Lin and used electric cattle prods to push him to the floor before dragging him away.

“The police sent people around to arrest them,” a villager told Cantonese reporter Fung Yat-yiu.

“They said that the villagers had been causing trouble and they made careless accusations against the villagers. Really they just wanted to arrest some people,” said the villager, who declined to be identified.

Meanwhile, authorities in Fujin city in the northeastern province of Heilongjiang detained property rights activist Yu Changwu, while fellow activist Wang Guilin went missing, believed detained, during a trip to the city from his home village of Dongnangang.

The attention of central authorities had prompted the detentions, which were intended to intimidate the rest of the 40,000 farmers with a stake in the dispute, Hu said.

An official in the Fujin municipal government said the case was extremely complicated. “Originally this land was collectively owned,” he said.

“Then it was bought back from the villagers by the government a number of years ago. Now that property prices are really taking flight, the villagers are unhappy because they feel they got a raw deal.”

Dongnangang residents were now much more frightened to talk about the land issue following the detentions, one villager said.

The armed police had set up checkpoints at every intersection in the area. They were also patrolling the streets with police dogs.

After Lin Jingeng was detained, some of the villagers announced the detention using their car-horns, and a crowd of several hundred protesters descended on the police station demanding his release, to no avail.

“The news travelled by car-horn. They were sounding all evening. Several hundred people went down there,” Lin said.

On Wednesday, 40-50 women and elderly people also converged on the police station calling for the release of the villagers and demanding an apology for hurting the baby.

Calls to the listed number for the Dongzhou police station during office hours Wednesday produced a “Number unobtainable” announcement.

A police notice distributed around the town Tuesday said Wei Chun, Lin Jingeng and a small minority of people had incited a disturbance on Sept. 22, been involved in a case of “illegal restraint” on Nov. 10, and carried out willful damage to property on Aug. 24. The charges had already been endorsed by the procuratorate and the two people had now been formally arrested.

No details were released on the situation of You Zizhu, however.

Local residents said the charges against Wei and Lin Jingeng were trumped up by the authorities, pointing to the length of time between the alleged offenses. They said the real motive behind them was to kickstart a project that had been successfully stalled by the villagers’ blockade, preventing the power station from becoming operational.

They said the increased police presence in the village probably meant the authorities intended to restart it imminently.

A local resident surnamed Chen said: “I think they are here to protect the pylon, which is still unfinished. They want to start it up again. These riot police have probably been drafted in to deal with the villagers still manning the blockade.”

An employee who answered the phone at the Shanwei municipal police chief’s office said they were unfamiliar with recent happenings in Dongzhou, and that the relevant senior officer wasn't available.

The atmosphere in Dongzhou was tense and fearful with the arrival of the new security forces, with many residents afraid to talk to the media for fear that their phones were being tapped.

One villager who declined to be named said: “Now they’ve arrested three people, and with so many armed police in town, of course people are frightened.”