Myanmar's military regime has come down hard on anti-government protestors. Security forces have smashed cameras and cellphones, beaten those people carrying them and warned the media about their reporting. At least 13 people have been killed. Video: AFP, Sep 28, 2007 >> Watch the video

BANGKOK—Ordinary Burmese fought back Friday against a military crackdown on weeks of monk-led anti-government protests, with crowds attacking troops and police with stones, knives, and insults, eyewitnesses said.

“The crowd threw stones at the trucks. They threw broken bricks. And so they fired into the air. When the crowd dispersed, they got off and grabbed people,” an eyewitness in Rangoon told RFA’s Burmese service.

“They were aiming at people with their guns—there were fire trucks and army trucks, but people still crowded around the marching monks. There are many people sitting on the streets and paying homage to the monks. The military has blocked roads and made it complicated.”

A woman in Rangoon witnessed a standoff between troops and local residents in the former capital by the Moe Gaung Pagoda.

“All the men were holding sticks. Now everyone, everyone from the houses, people from the stores, women, men, people my age, many people were holding sticks,” she said. “All of us were angry and swore at them. We’d already gone and taken a look at the monasteries the night before, and it was really bad.” 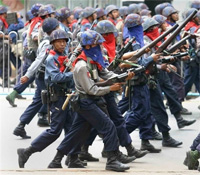 The violence continued amid a wave of popular anger at the treatment of Buddhist monks, who have been beaten and thrown aboard trucks in large numbers during the crackdown.

“The military government has used force,” one Rangoon man said. “They have committed inhumane acts against the monks and the people and have killed them again.”

“Last night, they entered Ngwe Kya Yan monastery and detained the monks and beat them, and kicked them with their army boots. We saw pools of blood at the monastery,” he said.

The Rangoon-based woman said crowds had seen similar scenes at the Moe Gaung Pagoda. “This morning, people from the ward went to take a look, and there was blood and all. They destroyed the altars and all.”

“They took away the money. The monasteries were left in a shambles. They came back around 11 o’clock. They returned and took away the remaining 50 monks. They put the monks onto their vehicles and took them away,” she said.

Officially, nine people have been confirmed dead by the authorities via official media. But overseas rights groups and diplomats said the real number of deaths could by several times that number.

Today, people have really exploded. There are so many gunshots. While I’m talking to you, there have been no fewer than five people shot and killed on the street.

Protesters in Rangoon vowed to continue to resist their military rulers.

“Today, people have really exploded,” the Rangoon-based man said. “There are so many gun shots. While I’m talking to you, there have been no fewer than five people shot and killed on the street.”

“This kind of murderous government that kills its own people should not be allowed in our country and our future.”

“However much they continue to shoot and kill, we are ready to face anything. We will increase the momentum of this demonstration. Boycotts will become fiercer. We will boycott the banks. We will boycott the communications and transportation. We will have civil servants’ boycott. Justice, peace, and democracy that we want in Burma is within our reach,” he said.

Original reporting by RFA’s Burmese service. Translation by Than Than Win. Director: Nancy Shwe. Executive producer: Susan Lavery. Written for the Web in English and edited by Sarah Jackson-Han.