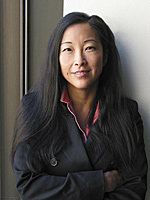 WASHINGTON—The Board of Directors of Radio Free Asia has appointed Vice President for Administration and Finance Libby Liu as the organization’s new President.

Funded by an annual grant from the bipartisan Broadcasting Board of Governors (BBG), RFA (www.rfa.org) is a private, nonprofit corporation that broadcasts news and information in nine languages to listeners in Asia where full, accurate, and timely news reports are unavailable.

The RFA Board issued the following statement:

“Finding a replacement for Dick Richter has been a difficult process. He created a broadcast organization with impeccable journalistic credentials to promote freedom and democracy in Asia. It is critical that RFA maintain and perfect that strong foundation. To find a successor, the Board initiated a nationwide search for potential candidates. The response to public notices provided a number of well-qualified applicants who were interviewed by members of the Board. RFA Board member and media executive Joaquin Blaya led the search and coordinated the interviews.

“As the search and interview process proceeded, it became clear that the best candidate was already employed at RFA.. As Vice President for Administration and Finance, Ms. Liu has demonstrated her managerial expertise in guiding RFA through a challenging period of internal changes. In her nearly two years at RFA, Ms. Liu has strengthened communication and trust between RFA management and its broadcast staff.

“The Board believes Ms. Liu’s credentials will serve RFA and its mission well. With business and law degrees, experience in administration, strategic planning, and human resource management, as well as the practice of law, Ms. Liu offers a unique mix of skills well-suited to the continued recognition of RFA as a premier international broadcaster in Asia. Her Asian heritage and Mandarin language skills only add to her ability to connect with RFA’s employees and broadcast mission.”