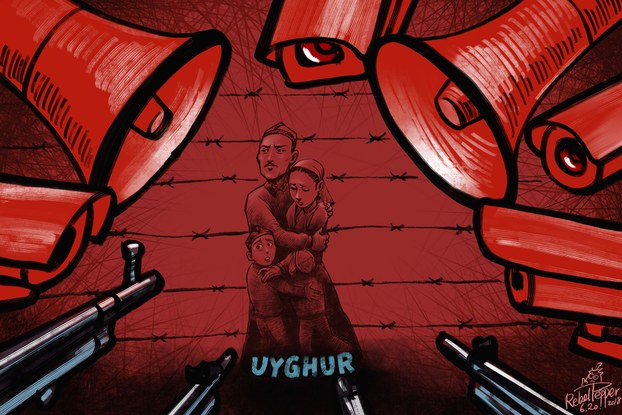 WASHINGTON – Radio Free Asia (RFA) today unveiled a video documentary interviewing former Uyghur inmates of the notorious “political re-education camps” in China’s Xinjiang Uyghur Autonomous Region (XUAR). Titled “Behind the Walls: Three Uyghurs Detail their Experience in China's Secret 'Re-education' Camps,” the multimedia project features recent interviews with three former detainees, who describe conditions for the men, women, and even children arbitrarily detained in these facilities -- which have been estimated to hold or to have held in excess of 1 million people from the XUAR.

“Among those suffering human rights abuses around the world, the current plight of the Uyghur people stands out,” said Min Mitchell, Managing Director for East Asia, who produced the project. “RFA has been among the first to shine a journalistic light on the situation to ensure Uyghurs are not forgotten."

“These interviews with people who were once behind the walls capture more than their suffering. Their personal stories help us to come to grips with a reality of vast proportions affecting millions.”

The subjects of this documentary series are a Uyghur businessmen from the city of Korla, who was detained for a month after traveling to Malaysia and Turkey – two countries blacklisted by Chinese authorities; A Uyghur woman in her 20s from Kashgar, who was held for four days after studying in Turkey; and a former business owner from Hotan city who was held for six months beginning in late 2016 because his family members were known to be practicing Muslims. All of these individuals were released in early 2017 and are now living outside of China in Turkey. While China continues to deny the existence of such camps at the United Nations and in official statements, the testimonies of these three detainees make clear not only the existence of such camps, but also the way they are operated and the detainees are treated as prisoners. RFA’s project gives a rare glimpse into a situation that is increasingly drawing global concern over what’s being described as a new apartheid state. RFA’s project was debuted this morning at the National Endowment for Democracy in Washington.

Radio Free Asia's Uyghur Service, the only Uyghur-language news service outside of China, has consistently uncovered the worsening human rights situation in China’s Far West, while reporting in one of the world’s most difficult media environments. Chinese authorities have long used the pretext of terrorist extremism to ramp up security and surveillance in the XUAR. But in recent years, the efforts have included high-tech surveillance, far-reaching and intrusive restrictions, which include bans on Uyghur cultural and religious expression, setting up checkpoints and “convenience” police stations on nearly every block in cities and in well-populated areas, and biometric screenings. As a consequence of RFA’s early reporting of events and developments in the XUAR, six U.S.-based journalists with the Uyghur Service have been targeted by Chinese authorities, who have detained dozens of their relatives in China.