Radio Free Asia Responds to Freedom of the Press Findings 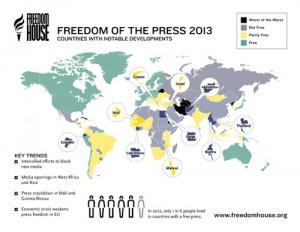 “Sadly, there are no surprises here,” Liu said. “Especially troubling in this year’s survey is the noticeable decline in Hong Kong’s media environment, which may be interpreted as a distressing indicator of things to come.

“It is also clear that Cambodia is approaching a free speech crisis, with its legal system used as an effective tool of repression of independent journalists and dissenting voices.

“Burma’s recent progress in media and political reforms offers fragile hope – but only time can tell if those changes stay permanent.”

Freedom House’s survey found that despite general improvement of media freedoms in Asia, the trends in the vast majority of RFA countries have worsened. Cambodia, which declined in its ranking, saw an increase of journalists behind bars, including independent radio station owner Mam Sonando, who was convicted of sedition and sentenced to 20 years in prison (he was later released), and the first murder of a reporter since 2008. Burma’s dissolution of its censorship body and release of imprisoned bloggers and journalists led to it receiving the largest improvement in ranking and score worldwide.

In China, the report observes the growing use of microblogs in sharing uncensored news among citizens, but also notes a crackdown on newspaper journalists and editors, as well as bloggers, especially during the November Party leadership transition. Hong Kong received a worse score than last year due to “growing government restrictions on journalists’ access to information and several violent and technical attacks against reporters, websites, and media entities” there. North Korea remains at the bottom of the list, tied this year with Turkmenistan. The report comes out just two days before World Press Freedom Day on May 3.

RFA’s mission is to provide accurate and timely domestic news and information to Asian countries whose governments prohibit access to a free press. Guided by the core principles of freedom of expression and opinion, RFA serves its listeners by providing information critical for informed decision-making. Radio Free Asia has nine language services delivering content online and via the airwaves and satellite television into its six target countries (China, North Korea, Burma, Vietnam, Laos, and Cambodia).