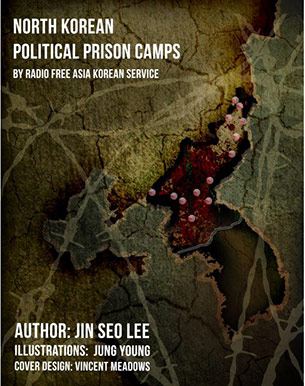 “In this in-depth look at one of the world’s most notorious prison systems, RFA gained unprecedented knowledge of the abhorrent, inhuman conditions faced by men, women, and children forced to live there,” said Libby Liu, President of RFA. “This e-book puts a spotlight on more than just the abuses suffered. It also exposes the regime behind this brutal system that still denies that system’s existence despite documentation and evidence.”

In North Korean Political Prison Camps, a trio of survivors describes to readers the “hell on earth” they endured in concentration camp-like conditions. Practicing Christianity, having a relative who is a prisoner, or criticizing the government or the ruling Kim family are tickets to a term in the camps where three generations of one family can face an interminable sentence under the Kim regime’s “guilt-by-association” doctrine. It is estimated that as many as 400,000 people have died in these camps from torture, starvation, disease, and execution. A United Nations commission on human rights in North Korea estimated in a 2014 report that between 80,000 and 120,000 political prisoners are still incarcerated in the camps.

Reported by RFA’s Korean Service, these first-hand accounts detail the intense labor, torture, starvation, sexual assault, and threat of death that inmates face every day as they are treated as something “less than animals.” As one inmate said, it is the kind of treatment that forces prisoners to turn on each other and “become devils ourselves.” While there are tens of thousands of prisoners held in the camps, North Koreans themselves know little about what goes on inside the camps since the Kim regime keeps a tight lid on any information about them. Survivors telling their stories in North Korean Political Prison Camps are: Kim Young-soon, who was sent to prison camp for befriending leader Kim Jong-il’s second wife, Sung Hye-rim; Kang Chul-hwan, imprisoned for 10 years on a guilt-by-association charge; and Kim Hye-sook, who was imprisoned for 28 years without explanation.