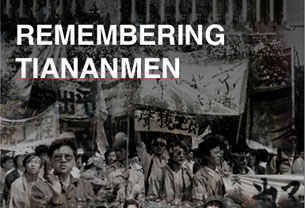 The cover of the e-book

WASHINGTON – Radio Free Asia (RFA) last night won a top award for its e-book on the Tiananmen Square crackdown in 1989 in the category of innovative production technology at this year’s International Media Excellence Awards, held by the Association of International Broadcasters (AIB). The award was announced at a ceremony, also known as the AIBs, in London.

“This award puts a spotlight on an event that Chinese censors have attempted to blot out in the mainland for more than 24 years,” said Libby Liu, President of RFA.  “This recognition also underscores Radio Free Asia’s hard work getting accurate news in difficult media environments.

“Radio Free Asia is thrilled to be honored this year at the AIBs among some of the world’s greatest journalists and news organizations.”

Marking the 24th anniversary of the June 4, 1989, crackdown on pro-democracy demonstrators in Beijing, RFA–in close collaboration with the Broadcasting Board of Governors’ Office of Digital and Design Innovation (ODDI)–launched Remembering Tiananmen, an interactive e-book in Mandarin and English, in June of this year. Consisting of multimedia content and eyewitness accounts, the digital-format publication recounts the demonstrations and eventual dead-of-night crackdown near Tiananmen Square that left an unknown number of people dead in China’s capital.

The e-book comprises rare video footage, audio recordings, photographs, and a timeline of events, as well as a detailed account by RFA Executive Editor Dan Southerland, then the Beijing bureau chief for The Washington Post, who covered the events on the ground with a team of reporters. Also included are interviews with surviving student leaders who discuss the demonstrations that began in mid-April and grew to about a million people in May. The publication’s section titled “Where Are They Now?” focuses on the lives of these student leaders and other central figures since the 1989 crackdown. The English version is available to iPad users. The Mandarin version is available in all e-book formats: PDF, EPUB, Kindle, and iPad.