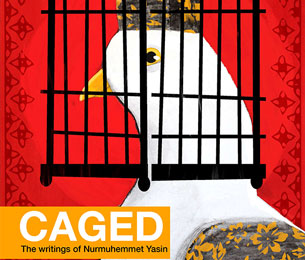 The cover of the e-book

WASHINGTON – Radio Free Asia (RFA) today launched an e-book collecting the writings of Nurmuhemmet Yasin, an award-winning Uyghur writer whom Chinese authorities sentenced to 10 years imprisonment in 2004. The collection, Caged, has been made available for the first time in digital format in the English and Uyghur languages for iPad and Kindle. It includes Yasin’s allegorical essay “Wild Pigeon,” the original publication of which led to his arrest and jailing, in addition to other writings and audio content.

“For the first time, Nurmuhemmet Yasin’s writings – which have been banned in China – can now be downloaded on mobile devices to be read and shared widely,” said Libby Liu, President of RFA. “Through this e-book, Radio Free Asia is bringing Yasin’s works to devoted fans in a new format while allowing those less familiar with his writing an opportunity to experience its power.”

RFA originally translated “Wild Pigeon” into English in 2005, a year after Yasin’s arrest, in addition to producing an audio dramatization of the work for its Uyghur listeners. The essay, an allegory about the life and fate of a pigeon yearning for freedom, was first published in the Kashgar Literary Journal. RFA’s dramatization is also included in this e-book. In addition to “Wild Pigeon,” the English version of the e-book contains the essay, “What Is Love?” The Uyghur version includes those works in addition to others. The digital publication also contains rich illustrations, created by the Broadcasting Board of Governor’s Office of Digital & Design Innovation (ODDI), to accompany the writings.

A prolific author and poet, Yasin is an honorary member of the English, American, and Independent Chinese branches of PEN, an international writers group. He published three volumes of poetry: First Love, Crying from the Heart, and Come On, Children, and his writings were included in Uyghur-language school textbooks. Yasin is scheduled to be released in November 2014, and while rumors have circulated that he may have died in prison, none have been confirmed and his family continues to deny them. Yasin was one of the few prisoners in China visited by the U.N. Special Rapporteur on Torture in 2005.