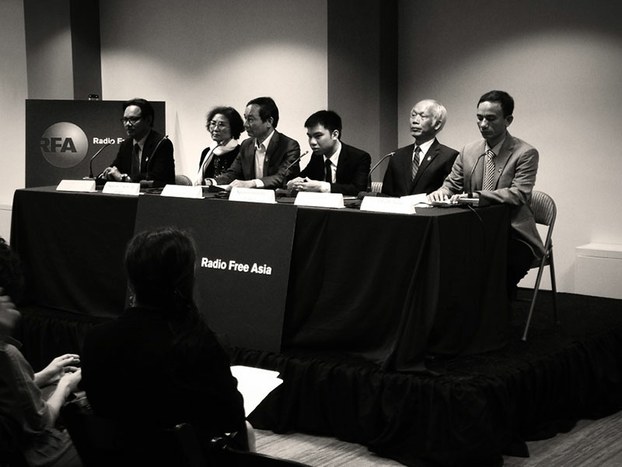 “For RFA’s audience – and everyone around the world – empowerment begins with free speech and free press on any platform,” said Libby Liu, President of RFA. “The will and determination of these courageous bloggers from Vietnam, who risk so much to join us here today, are an inspiration.

“Their cause is our cause. And it is the cause of all who pick up the banner of free expression and free media around the world.”

Vietnam’s authoritarian government encourages the Internet’s growth for the sake of economic gains. But at the same time, it retains tight controls and clamps down on government criticism online. It blocks websites, including RFA’s; launches cyber attacks on online media; aggressively monitors its citizens’ Internet use; routinely shuts down social media platforms; restricts content allowed online through a series of decrees; imposes narrow limits on providers such as the country’s abundant Internet cafes; and jails bloggers – 31 at last count – making Vietnam second only to China as the world’s biggest prison for netizens.

This stark reality, along with hopes of finding ways to change it, were discussed in the first panel by the visiting bloggers, who included Le Thanh Tung, a freelance journalist and digital activist; Ngo Nhat Dang, a freelance journalist and contributor to the BBC Vietnamese section; Nguyen Dinh Ha, a blogger and digital activist; Nguyen Thi Kim Chi, an actress who began blogging; and To Oanh, a blogger and former contributor to state-owned newspapers. Speaking about these issues on the second panel, which was moderated by President Liu, were Scott Busby, Deputy Assistant Secretary of State for Democracy, Human Rights, and Labor; Do Hoang Diem, Chairman of Viet Tan; Jon Fox, Global Advocacy Manager at ACCESS; and Google Program Manager Meredith Whittaker.