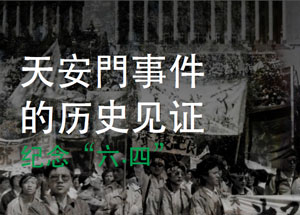 WASHINGTON, DC – On the eve of the 24th anniversary of the June 4, 1989, crackdown on pro-democracy demonstrators in Beijing, Radio Free Asia released an interactive e-book in Mandarin Chinese, titled Tiananmen Incident in Historical Perspective. Consisting of multimedia content and eyewitness accounts, the digital-format publication recounts the demonstrations and the eventual dead-of-night crackdown near Tiananmen Square that left an unknown number of people dead in China’s capital.

“Almost a quarter century later in China, government censors have all but blotted out the memory of Tiananmen in the mainland,” RFA President Libby Liu said. “For those fortunate enough to have access to uncensored information, that’s as tragic as it is unimaginable.

“With this e-book, we hope to restore for our Chinese audience the real-life stories and accurate information that is simply missing from China’s official version of what happened in Beijing on June 4, 1989.”

The e-book comprises rare video footage, audio recordings, photographs, and a timeline of events, as well as a detailed account by RFA Executive Editor Dan Southerland, then the Beijing bureau chief for The Washington Post, who covered the events on the ground with a team of reporters. Also included are interviews with surviving student leaders, who discuss the demonstrations that began in mid-April and grew to about a million people in May. The lives of these leaders since the 1989 crackdown, as well as some of its central figures, are the subject of the publication’s section titled “Where Are They Now?”

The e-book may be accessed and downloaded from RFA’s website for iPads and tablets, and will be made available on Apple iTunes in the near future.