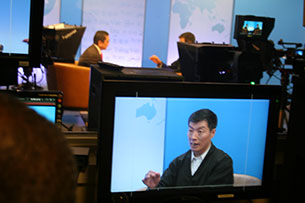 Lobsang Sangay, the political head of the Tibetan government in exile, being interviewed at Radio Free Asia.

WASHINGTON – Speaking with Radio Free Asia (RFA) today, Lobsang Sangay, the political head of the Tibetan government-in-exile, renewed his call for China to find a resolution to the Tibetan issue through dialogue. Sangay’s comments came during a live interview with RFA’s Tibetan Service at RFA’s headquarters in Washington.

“We are telling the Chinese leadership that their hardline policies are not working in Tibet,” Sangay said. “When the Tibetans inside Tibet are resisting by refusing to fly the Chinese national flag in Driru and are protesting against Chinese mining operations, this is proof that China’s hardline policy cannot last.

“Only through talk and dialogue can the Tibet issue be resolved.”

Sangay, known as the Sikyong, is the elected head of the Central Tibetan Administration (CTA), headquartered in Dharamsala, India. Before visiting RFA’s studios, Sangay met with Under Secretary Maria Otero at the U.S. State Department, and with U.S. Senate Majority Leader Harry Reid (D-NV) and Representative Ed Royce (R-CA), Chairman of the House Foreign Affairs Committee, among other U.S. officials to discuss recent developments in China’s Tibetan regions. Over the last two years, more than 120 Tibetans have self-immolated in protest of Beijing’s rule.

RFA’s Tibetan Service has closely covered this topic, as well as China’s crackdown and the region’s unrest, which recently has included large-scale demonstrations against forced displays of loyalty to the Chinese state by Tibetans. Sangay’s interview was webcast on RFA Tibetan’s website and broadcast via shortwave radio. The full interview is available on the service’s website.