Radio Free Asia Launches ‘A River in Peril: The Mekong Under China’s Control’ 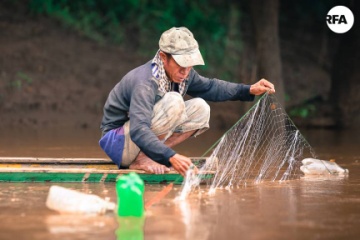 WASHINGTON – Radio Free Asia (RFA) today launched a multimedia investigative web series examining the impact of China’s rapid development on the Mekong River and the communities downstream. “A River in Peril: The Mekong Under China’s Control” tells the story of Southeast Asia’s longest river, on which more than 60 million depend for their food, drinking water, and livelihoods. Relating personal accounts from people of all walks of life from six countries in addition to analysis by some the world’s foremost authorities on the Mekong, the project follows on RFA’s award-winning 2009 web series “The Mekong Diaries,” which chronicled the early stages of the major waterway’s damming.

“This is an underreported story,” said Dan Southerland, the chief editor of RFA’s six-part series of blogs and photos, as well as a forthcoming e-book on the plight of the Mekong. “I call it the slow death of a river, which has had an untold effect on the many millions who rely on the Mekong’s health and viability.”

The river’s slowly developing crisis rarely gains much attention from mainstream Western media or the state-controlled press in several Southeast Asian countries. This is partly because of a lack of transparency from regional governments and developers over plans by China, Laos, and Cambodia to build more dams. RFA revisited many locations from its 2009 series in China, Myanmar, Thailand, Laos, Cambodia, and Vietnam, interviewing people who have both witnessed and endured the drastic changes since then. Among those interviewed were Laotian villagers who complain that their government tells them little about the impact of dams built in Laos.

“A River in Peril” explores these stories and more in reporting on the dire environmental, health, and commercial consequences that have been felt by numerous communities and individuals living along the river as a result of Chinese industrial development and dam building. People featured in the project’s blog series include Cambodian villagers who demonstrate against their government and block bulldozers sent in to destroy their village and make way for a new dam; a Thai teacher who organizes villagers to stand up against Chinese-backed enterprises that pollute the villagers’ drinking water; and farmers and fishermen in Vietnam’s heavily populated Mekong Delta who complain that upstream dams have blocked the sediment needed to refresh their soil and riverbanks. Offering expert commentary are Brian Eyler, Southeast Asia Director at the Stimson Center; Dr. Ian Baird of the University of Wisconsin-Madison; and Dr. Pham Tuan Phan, Chief Executive Officer of the Mekong River Commission.