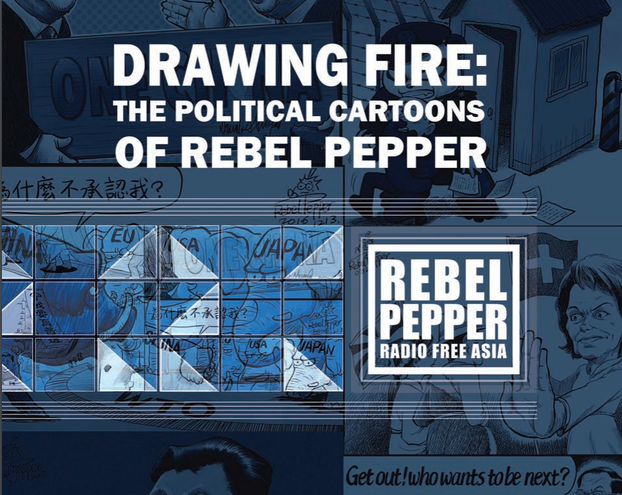 WASHINGTON – Radio Free Asia (RFA) was announced as a winner of a Sigma Delta Chi award for “Drawing Fire: The Political Cartoons of Rebel Pepper” by the Society of Professional Journalists (SPJ) in the international competition’s new category of best e-book. RFA’s e-book collects the work of resident political cartoonist and Chinese dissident Wang Liming, who goes by the pen name of “Rebel Pepper.” The collection was released last December and includes a selection of Wang’s drawings tackling issues from North Korean nuclear provocations to Cambodian political machinations to the Rohingya humanitarian crisis in Myanmar, among others.

“Rebel Pepper’s political cartoons show the power of humor and satire as tools of free expression,” said Bay Fang, RFA’s Executive Editor, who edited the e-book. “This collection is especially resonant with RFA’s audiences in countries under authoritarian rule that restrict free speech and free press.

“Radio Free Asia is honored to accept this prestigious award for our e-book that shows the amazing breadth of Rebel’s work.”

In his native China, Wang’s success in giving expression to the thoughts of his thousands of followers on both taboo subjects and everyday experiences drew the wrath of the Chinese Communist Party. In 2014, Wang was forced to leave his homeland, finding haven first in Japan before settling in Washington, D.C. Throughout his journey he continued to hone his craft, challenging Chinese state-controlled narratives and expanding his graphic editorials for RFA. “Drawing Fire” includes 50 of Wang’s cartoons, in which he shapes nuanced geopolitical complexities into sharp and relatable pieces of visual art. Wang’s cartoons have appeared in the Japanese edition of Newsweek, Index of Censorship, and China Digital Times, among other publications.  He began working for RFA in June 2017.

Other notable winners of this year’s Sigma Delta Chi Awards include reporters, columnists, and designers with the Associated Press, ProPublica, NPR, Washington Post, Los Angeles Times, Center for Investigative Reporting, Politico, and the Intercept, among others.