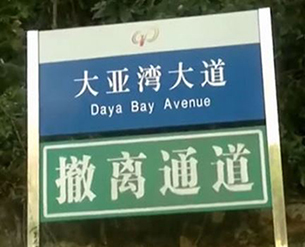 A road sign near the Daya Bay nuclear facility in Guangdong, China.

“This award helps to underscore an important issue of safety for the millions in China who live and work near nuclear plants,” said Libby Liu, President of RFA. “The tireless work of Radio Free Asia’s Cantonese Service brings this story to the people who would otherwise be left in the dark by Chinese state-controlled media and officials.

“The continued recognition of this story also inspires us at RFA to continue bringing news to people in Asia who would otherwise not be able to access uncensored, accurate journalism.”

In June 2010, radioactive substances were detected in cooling water at the Daya Bay nuclear power plant in southern Guangdong, China’s most populous province. After RFA Cantonese broke the story, local authorities claimed that the danger to the public was “negligible.” Four years after the incident, an RFA undercover film crew traveled to the site to investigate safety conditions in the area. RFA’s team learned that local residents remain woefully ignorant of the danger of nuclear waste, even though waste from the power plant is dumped at a site that is five kilometers from where they live. RFA found also that, in order to prevent the rise of popular discontent in the aftermath of the 2010 radioactive leak, local authorities have been providing generous monthly living subsidies to those living within the immediate vicinity of the plant to quell discontent and concerns among locals.

RFA’s four-part multimedia series, which aired in four parts in December 2014, also explores safety issues surrounding Guangdong’s Huizhou Nuclear Power Plant, one of 26 nuclear power plants under construction in China. The majority of local residents interviewed by RFA were only vaguely aware, if at all, of the existence of the nuclear plant, much less the health risks of living close by. China is in the midst of a serious push to expand its nuclear power industry to lessen reliance on fossil fuels. What is troubling, especially in the post-Fukushima era, is that there does not exist in the country a comprehensive national program to provide citizens with information on possible public health hazards in their communities; nor have the authorities established emergency plans and response mechanisms in the event of a nuclear accident.

The award was presented at a ceremony in New York City. Earlier this year, the series also won a Sigma Delta Chi award, presented by the Society of Professional Journalists, in April. Other winners at New York Festivals included RFA sister broadcaster Radio Free Europe/Radio Liberty, the Middle East Broadcasting Networks (MBN), the Australian Broadcasting Corporation (ABC), the Canadian Broadcasting Corporation, BBC Radio 4, RTE, and WNYC, among many other esteemed broadcasters from around the world.