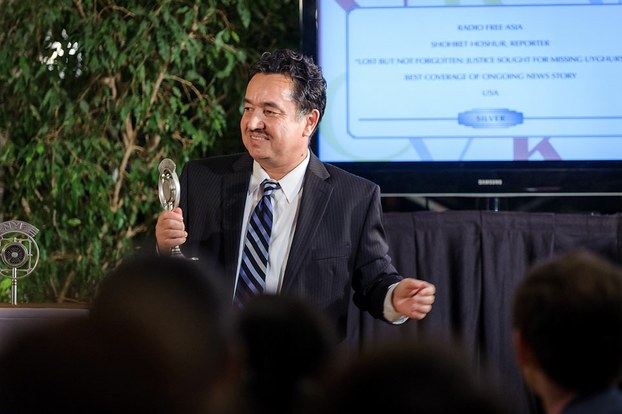 “So much of Radio Free Asia’s coverage strikes at the heart of emotions felt by people in difficult situations,” RFA President Libby Liu said. “Whether reporting on North Korean refugees watching their former countrymen and women compete in the Olympics or the stories of missing Uyghurs, RFA shares the personal stories that would otherwise go unreported.

“We are thrilled to be recognized at the New York Festivals again this year and hope this puts a spotlight not just on our work as a news organization, but also the people we feature in our reports.”

For the silver medal entry, titled, “Lost but Not Forgotten: Justice Sought for Missing Uyghurs,” RFA’s Hoshur interviewed the Uyghur families of 38 individuals whose whereabouts remain unknown after they were detained by Chinese authorities. They have remained missing without official explanation for almost four years since the 2009 riots in Urumqi. The three-part series, which named the missing individuals, led to the World Uyghur Congress publishing a report on the enforced disappearances and Amnesty International urging Beijing to disclose more information.

RFA’s “The Ties that Bind: North Korean Defectors at the Olympics” showcases 15 former North Korean residents who cheered for the team representing the country from which they had fled. Their feelings of homesickness were not for the regime but for the families and people they left behind. RFA Korean Service’s Kim interviewed the refugees who traveled to the town of New Malden, outside of London, to watch the North Korean women’s soccer team, which was defeated by the United States.