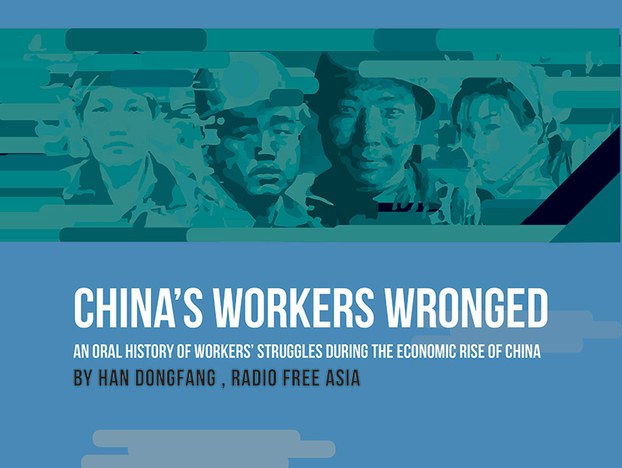 WASHINGTON – Radio Free Asia (RFA) published an e-book today that highlights the struggles and challenges faced by China’s workers during the country’s dramatic economic rise. “China’s Workers Wronged,” available for a free download on RFA’s website, is based on 88 interviews with Chinese workers conducted in recent years by China Labor Bulletin Executive Director Han Dongfang for RFA. The publication will also be available for free on Google Play and the iTunes Store.

“With this e-book, RFA makes available to our audiences an important, in-depth investigation of a story so often overlooked.”

While the rise of China as a global economic powerhouse has been well documented, less well known is how ordinary workers reaped few rewards during this period of astounding growth. Their side of the story is subject to censorship in the Chinese state media and is often underreported in Western media. Roughly half of Han’s interviewees were victims of the injuries or illness endemic among coal miners, construction workers and others whose local governments deny them the benefits that are owed to them. Some interviewees tell of being cheated out of their wages or arbitrarily reassigned to jobs with lower pay and poorer working conditions. Some are simply fired without compensation.

Seeking justice through the court system, they often hit a stone wall. As Han explains in the foreword to his book, China’s official trade union is “in league with the Communist Party and the factory bosses, and does nothing to represent the workers.” Many of these stories are harrowing, but are also inspiring. The book closes with several encouraging examples of how workers have come together to defend their legal rights and push for better pay and working conditions. “Going forward,” states Han, “the key task for China’s workers is to reclaim the trade union and make it an effective bulwark against employer abuses.”

Based in Hong Kong, Han Dongfang has been an advocate for workers’ rights in China for more than two decades. He first came to international prominence during the Tiananmen Square protests of 1989 when, as a railway worker, he helped set up China’s first independent trade union, the Beijing Autonomous Workers’ Federation. In 1993, he was expelled to Hong Kong, where the following year he set up the China Labor Bulletin to promote labor rights in mainland China. He also has his own radio talk show on Radio Free Asia in which he conducts regular interviews with Chinese workers and farmers.